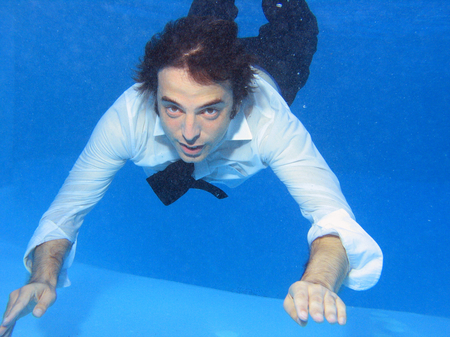 "The Dark and the Surreal: Israeli Writer and Filmmaker Etgar Keret"

This event is free and open to the public. For more information contact Rachel Rubinstein at 559.5821 or email at rrhacu@hampshire.edu

"Etgar Keret is a genius..." —New York Times
"Short, strange, funny, deceptively casual in tone and affect, stories that sound like a joke but aren't—Etgar Keret is a writer to be taken seriously." —Yann Martel
"Keret can do more with six . . . paragraphs than most writers can with 600 pages." —Kyle Smith, People

Hailed as the voice of young Israel and one of its most radical and extraordinary writers, Etgar Keret is internationally acclaimed for his short stories. Born in Tel Aviv in 1967 to an extremely diverse family, his brother heads an Israeli group that lobbies for the legalization of marijuana, and his sister is an orthodox Jew and the mother of ten children. Keret regards his family as a microcosm of Israel. His book, The Nimrod Flip-Out, (Farrar, Straus & Giroux, 2006), is a collection of 32 short stories that captures the craziness of life in Israel today. Rarely extending beyond three or four pages, these stories fuse the banal with the surreal. Shot through with a dark, tragicomic sensibility and casual, comic-strip violence, he offers a window on a surreal world that is at once funny and sad.

His books are bestsellers in Israel and have been published in twenty-two languages. Books include Bus Driver Who Wanted to Be God (2004, St. Martin's Press); Missing Kissinger (2007, Chatto & Windus); and Gaza Blues (2004). In France, Kneller's Happy Campers is listed as one of the Fnac`s two-hundred books of the decade, and The Nimrod Flip-Out was published in Francis Ford Coppola's magazine, Zoetrope (2004). Keret has received the Book Publishers Association`s Platinum Prize several times and has been awarded the Prime Minister's Prize and the Ministry of Culture's Cinema Prize. More than forty short movies have been based on his stories, one of which won the American MTV Prize (1998).

As a filmmaker, Keret is the writer of several feature screenplays, including Skin Deep (1996), which won First Prize at several international film festivals and was awarded the Israeli Oscar. Wrist Cutters, featuring Tom Waits, was released in August 2007. Jellyfish, his first movie as a director along with his wife Shira Geffen, won the coveted Camera d'Or prize for best first feature at the Cannes Film Festival 2007. The animated feature film $9.99, based on several of Keret's stories, marries the tradition of Jewish self-flagellating humor with uncanny absurdity. The film shows us miracles coexisting with the mundane, and offers a beguiling view of what hope looks like in a hauntingly fragmented world. Keret, at present, teaches at Ben-Gurion University.

This is a new collection of the stories that made Etgar Keret Israel's bestselling and most acclaimed young writer. A birthday party magician whose hat tricks end in horror and gore, a girl parented by a major household appliance, the possessor of the lowest IQ in the Mossad—such are the denizens of Etgar Keret's dark and fertile mind. The Girl on the Fridge contains the best of Keret's first collections, the ones that made him a household name in Israel and the major discovery of this last decade.