It’s 7 a.m. on a cold, wet Friday in October and a stalwart crew of 20 or so Hampshire College students, bedecked in boots, tattered thrifted flannels, and knit woolen hats, is gathered on the edge of campus in a large field bursting with brassicas. These students may have rolled out of their beds moments ago, but they’re listening closely to instructions from Nancy Hanson, the College’s CSA manager and a veteran vegetable grower. They'll spend the morning combing through rows of leeks, cabbages, broccoli, cauliflower, peppers, eggplant, beets, and carrots, digging and picking more than 1,000 pounds of produce for the CSA (Community Supported Agriculture) distribution that afternoon.

Farms are sprouting on campuses across the country, but this fall the CSA program at the Hampshire College Farm is celebrating its 25th anniversary. Grown from deep roots and the dedication of countless students, staff, and faculty, during the College’s first two decades, the Farm Center had been home primarily to faculty research projects, among them an esteemed breeding program for livestock–guardian dogs led by Raymond Coppinger, professor emeritus of biology. It wasn’t until 1992 that the mission of the farm turned to the sustainable production of food.

That fall, Lisa Walz 90F and Jillian (Uhler) Ward 87F developed their Division III capstone project working with their faculty chair, Brian Schultz, associate professor of entomology and ecology, and the newly hired farm manager, David Holm, to plan the CSA program and plant the crops that would comprise it. That first growing season fed 19 original CSA shareholders with a variety of vegetables grown by Holm, Ward, interns, and work-study students. “The first year, there was such an awesome sense of community. We all put our heart and soul into it,” recalled Ward in an NSS magazine interview in 2001.

At a school known for innovation, the Hampshire College Farm was in fact one of the first farms to pioneer the CSA model that would transform the food landscape not only in the Pioneer Valley, but also around the country.

Today the 100-acre farm is flourishing: Annually it employs up to 50 students; hosts dozens of academic courses and projects by students, faculty, and staff; produces an average 75,000 pounds of vegetables; tends a wide variety of animals; produces more than 20 gallons of maple syrup; and provides food to about 200 CSA shareholders.

The CSA model provides farms with a secure income stream at the beginning of the growing season, when shareholders pay for a seasonal membership. Months later, during harvest, shareholders receive a weekly installment of fresh-picked produce from a trusted, known source, and share the rewards of seasonal abundance. But they also help shoulder the risks of crop failure.

“We love the tradition of CSA at Hampshire, meeting friends, students, and farmer Nancy as we come to collect veggies each Friday,” says longtime CSA member Annie Rogers, professor of psychoanalysis and clinical psychology. “We can our farm tomatoes — unsurpassed in flavor — freeze farm ginger and turmeric, and enjoy these treats all through the year.”

The College’s vegetable CSA program has expanded in recent years and now offers a meat share in spring and fall, featuring exceptional-quality beef, pork, and lamb, all raised and pasture-fed on campus by Livestock and Pasture Manager Pete Solis and student interns.

The CSA model has been one way to put the educational mission into action and also to finance the production of quality food. Assistant Professor of Ecology and Entomology Brian Schultz has belonged to the CSA program since he helped to start it, in 1992, and cites this duality as a strength of the program. “In addition to the farm being a classroom and lab for students, staff, and faculty,” he says, “the CSA practices actual food production for paying customers, so it’s much more of a real-world, real-farm experience and operation.”

Nancy Hanson has managed the CSA program for more than 17 years, taking the reins from the first full-time manager, Diana Kushner 86F, in 1999. During her tenure, Hanson has increased CSA membership and overseen some key infrastructure improvements that have enabled the farm to thrive. The construction of the CSA barn, in 2002, was the turning point: It provided the space and washing facilities to improve the quality and quantity of vegetables the farm could produce. That same year, Hanson was able to get her produce from the field to the salad bar by convincing the general manager of campus food vendor Sodexo to purchase 10 CSA shares for the dining hall.

Ten years later, those 10 cafeteria shares grew into an institutional initiative led by President Jonathan Lash. The goal of Hampshire’s Healthy Food Transition, established in 2012 not long after Lash’s inauguration, is to change the enterprise of producing, preparing, consuming, and managing food on campus by sourcing as much food as possible from the College farm and other local farms and producers.

In 2013 Lash appointed Food, Farm, and Sustainability Director Beth Hooker to implement the changes to the College’s food system and to strengthen current connections and build new ones between the farm and the academic program. Recent grants from the Lydia B. Stokes, Henry P. Kendall, Vervane, Kern, and Roddenberry Foundations and the National Science Foundation are propelling new efforts at the farm and across campus.

The campus dining hall, now managed by Bon Appétit, gets 75 CSA shares in the fall semester and features Hampshire Farm–centered meals every Wednesday. Recent green-energy innovations on the farm funded by the National Science Foundation have made it possible to expand production and storage capacity to meet the needs of the campus dining service. The farm is producing more food than ever with the help of two converted electric tractors, and using new cold-storage facilities to harvest and store produce.

Despite the increased food production, the farm still relies on students as its workforce. “Working with the students is my favorite part of this job,” says assistant vegetable grower Jason Dragon. “I love the energy, curiosity, and laughter they bring to the farm.” But, he admits, “waking up early is hard for them. I’m proud of the students who show up consistently to do the work.”

Hanson and Dragon say that student labor is perhaps not the most efficient way to run a farm, but they also agree that it's a compelling way to teach students what it means to be part of a food system. “Most students are exposed for the first time to the complex and often difficult process of food production,” says Hanson. “My hope is that when they leave here, they never look at a carrot in the same way again."

By Hanson’s count, at least 26 students who have worked at the College farm during her tenure have gone on to forge careers in sustainable agriculture. Although Hampshire is not an agricultural college in the traditional sense, the farm serves as seedbed for creativity and innovation. “So many of the things we do on the farm are student-driven ideas,” Hanson says. “And if they’re really good ideas, we keep doing them.”

On the list of student innovations are season-extending greenhouses, an electric-tractor conversion, heirloom-seed preservation, and organic pest-control inventions. Students have gone on to start their own organic farms, heritage seed–saving networks, local food–catering business, restaurants, and distribution cooperatives. The inspiration for many of those careers was likely sparked in these fields.

As Friday’s vegetable harvest ends, I find two student farm workers warming up over cups of hot chocolate at the campus’s Kern Kafé, which, in its first few months of business, has ramped up its use of food from the College farm, with plans for a significant increase next season. Shelby Gaiss and Owen Aptekar-Cassels have worked together at the farm year-round as summer interns and work-study harvesters, and both are at the start of their Div III studies. Aptekar-Cassells credits the farm for keeping him rooted. “It has been a nice way to feel connected to the place and the people here,” he says. “I like seeing the crops through from seed saving to seeding, transplanting, hoeing, and harvesting. Then when I staff the CSA pickup, sometimes shareholders will tell me what they’re planning on cooking that night from the vegetables I helped to grow.”

After a few pensive sips of hot chocolate, Aptekar-Cassells marvels that “the quantity and quality of the vegetables the farm grows is really incredible — and the fact that the work happening on the farm is all done by students who are still learning really says something about Nancy and Jason’s skills as farmers and teachers.”

Gaiss nods and says that working on the farm has been her “favorite part of Hampshire.” Even though she may not farm forever, she says, she hopes to work on another farm for a few seasons after she graduates. In the meantime, her Div III examination of heavy-metal contamination in corn seed won’t take her far from the fields. 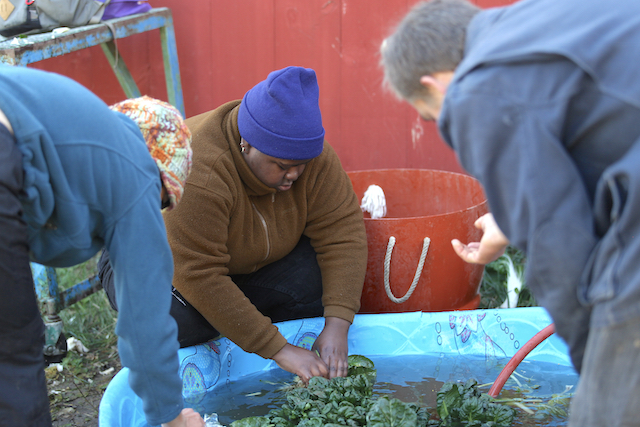 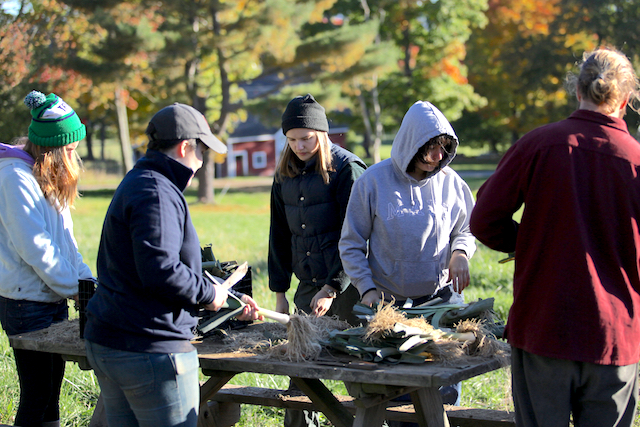 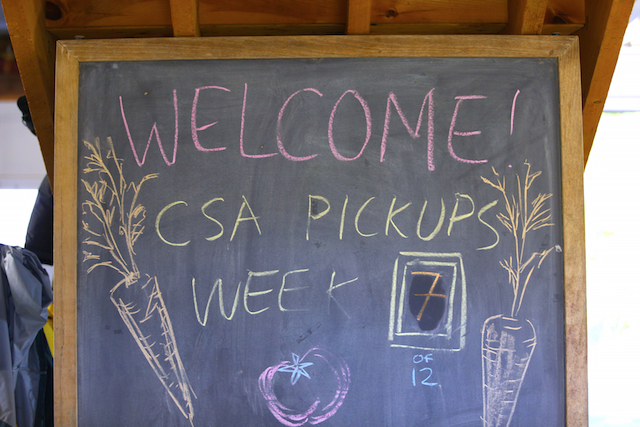 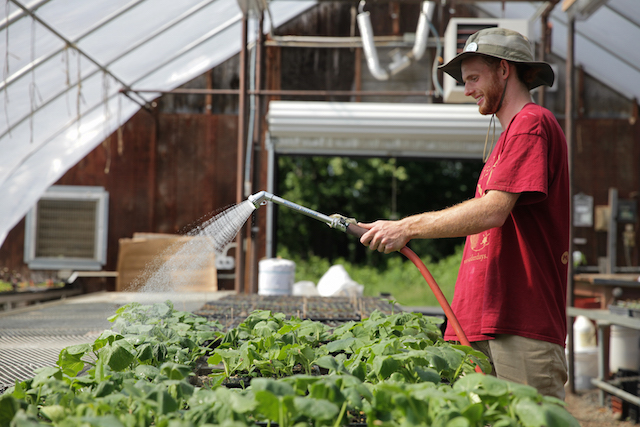 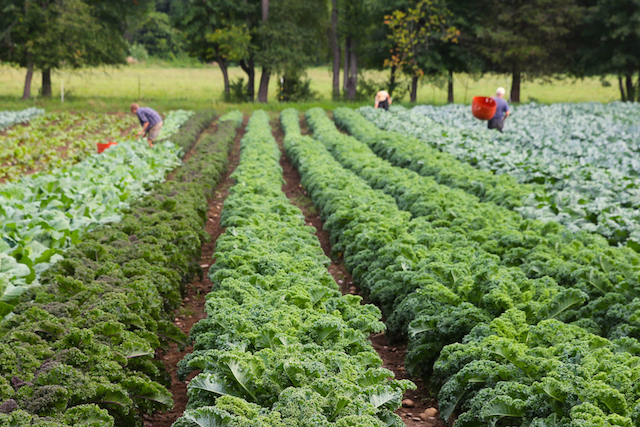