Event will examine artistic and social-political themes across disciplines such as African American studies, literature, and philosophy, across media such as architecture, painting, and sound

The burst of new thought on black aesthetics, incited in part by the tragic deaths, incarceration, and inequality of black people today and their response in resistance, is the focus of a public symposium taking place this weekend, March 31—April 1, at Hampshire College.

Hampshire Professor Monique Roelofs is co-organizing the two-day "Questioning Aesthetics Symposium: Black Aesthetics" with Michael Kelly, University of North Carolina Charlotte professor and president of the Transdisciplinary Aesthetics Foundation, to investigate this historically underexplored area of inquiry and practice. “We understand aesthetics to be critical thinking about art, culture, design, and nature, often in relation to social, political, and moral issues,” the organizers write in the symposium’s accompanying materials. “The aim here is for aesthetics to provide bridges among disciplines and art practices.”

The symposium will examine the artistic and social-political issues raised in important recent texts on black aesthetics from a variety of disciplines—for example, African American studies, comparative literature, philosophy, and cultural studies—and reflecting a range of art mediums, from poetry, music, and the visual arts to architecture and popular culture.

The event features five panels and 15 distinguished speakers from across the country, followed by a roundtable for attendees, all designed to delve into questions, models, and directions in this vibrant field of inquiry.

Presentations will be moderated by Hampshire and Five College faculty. Among Friday’s speakers:

For the full schedule, visit blackaesthetics.hampshire.edu.

The event is part of the "Questioning Aesthetics Symposium" series, seven of which have been held to date. It is funded in part by the Transdisciplinary Aesthetics Foundation, established in 2014 to explore, cultivate, and sustain transdisciplinary research in aesthetics and educate the public as well as members of the academic community and the art world about the importance and relevance of this research.

Following are the symposium’s cosponsors:

The American Society for Aesthetics 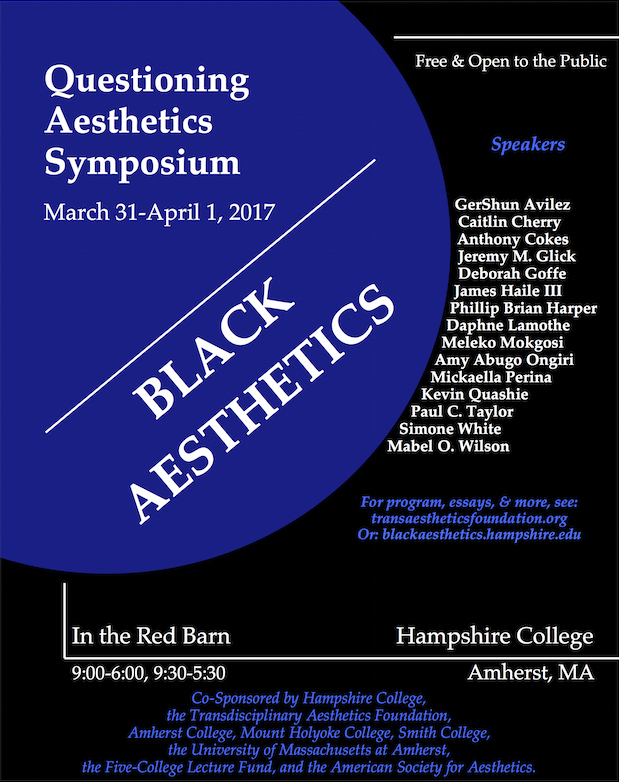