Presented by the Five College Multicultural Theatre Committee, the Forum Theater Troupe from the Migrant Family Support Center (CAFAMI) in San Francisco, Tetlanohcan, Mexico, will be in residence at Hampshire College, Smith College, and the University of Massachusetts.

This dynamic residency will culminate with performances of three distinct forum theater plays at Hampshire College on Tuesday and Wednesday, October 23 and 24. The plays will be performed in Spanish, with English supertitles. As is the case with all Forum Theater plays, the pieces will present situations defined by a specific problem, and then the audience will step in to perform interventions about how to respond. Through them we hope to ask: In what ways are we all connected, implicated, and woven together with issues on the border and across it? And how do the lives of women in Tetlanohcan connect to our own, and how is our own lifestyle in the U.S. shaping life across the border?

On December 3, current theatre students will have a chance to talk to theatre alumni who have been working in the field for the past ten years.  The panel will include:
Chana Porter, New York-based playwright who co-founded her own company.
Briana Sloane, director/performer/devised theatre artist, currently in the MFA program at the University of Massachusetts Amherst.
Skyler Schrempp, Chicago-based performer and educator. Artistic Director of the Viola Project, which works to empower young girls through performance and the study of Shakespeare.
Jessica Greenberg, lighting designer with experience in New York and regional theatres.

Through the generosity of alum Sara Goldfinger 94F, we are excited to welcome playwright and screenwriter David Rambo to Hampshire College this year.  David's most recent television credits include episodes of CSI and the creation of the new CBS show NYC-22. David will be leading a writing workshop, talking about the process of creating television and play scripts, and mentoring student scriptwriters.

The Wayne Kramer Guest Artist Fund was established in honor of longtime Hampshire Theatre Professor Wayne Kramer. The goal of the fund is increasingly to feature Hampshire alums among the guest artists who visit Hampshire.
Some of the previous recipients of this fund have been E.V. Day 97F, a sculptor made prominent by her "exploding couture" series; Pearl D'Amour, a collaborative team which creates performance inside and outside traditional theater spaces; Enchanted Circle Theatre Company, co-founded by a Hampshire alumna Priscilla Kane Hellweg 76F, an educational theater that engages, enhances, and inspires learning through the arts, and Peggy Shaw, who "makes performance and theater, for those interested in hearing the poetry or point of view of a 60-plus-year-old, second-generation Irish, working class grand butch mother."

Students in the Fall 2012 theatre design and criticism classes will attend A.R.T.'s production of Marie Antionette.  Following the production, they will participate in a backstage tour and a discussion with members of the production team

Through the generosity of alum Sarah Goldfinger 94F, we also offer an annual theatre trip further afield, often to New York City or Boston. Last year's group attended the Tony Award-winning production of Porgy and Bess at the American Repertory Theatre in Cambridge.The year before, we took a large group to see the equally-acclaimed production of War Horse at the Lincoln Center. 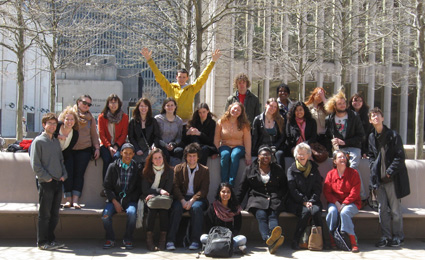