Among my friends here at Hampshire, Noah Falstein 75F has a dream job: he is a video game developer and producer, and not only gets to create new games but also gets to spend many hours playing them. 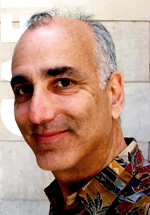 For over 30 years, Falstein has been in the thick of gaming as it has grown into a multi-billion dollar industry. "Each game I work on has its unique aspects, and I love (and seek) variety in what I do," says Falstein in an email.

"I got to brainstorm with Steven Spielberg and George Lucas," he says, "and have been lucky enough to work on many exciting projects and hit titles," such as "Indiana Jones and the Fate of Atlantis," among many others.

Lately, he has been moving into the emerging field of "serious games." "Some recent games I've worked on have involved helping kids with cancer stick to their treatment regimen, a simulation of the International Space Station, games for aging adults to keep their brain function sharp, a game for Cisco to teach network engineering principles, and many more," says Falstein.

Serious games help people learn without making them feel as if they are sitting in a classroom. "The serious game field is great because I can make games that are fun but that also help people, even save lives," he says. "That's very gratifying."

Falstein, whose daughter, Mara Savina Falstein, is beginning her second year at Hampshire, created a computer game for his Div III project in 1979, using it as a demo to get a job after graduation. "At the time, game development seemed more like a hobby than a job, and the entire 'industry' was just a couple thousand people," he says.

In the early years of his career, Falstein was among the first 10 employees for three major companies, Lucasfilm Games/LucasArts, The 3DO Company, and Dreamworks Interactive. He began freelancing 13 years ago, starting The Inspiracy, one of the oldest freelance game design companies in the world.

"[U]ltimately, what drew me to the industry and what keeps me happy is the fact that games can provide one of the most intense forms of entertainment possible," says Falstein. "I think games, and interactive entertainment in general, have a very bright future, and I expect that Hampshire is still one of the best places to prepare for it. Where else could you create a game as part of your education?"