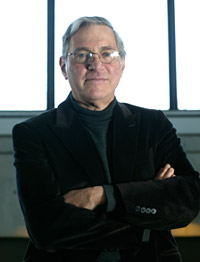 Professor Michael Klare has been invited to speak at the APEC CEO Summit in Vladivostok, Russia, September 7-8. He will participate in Friday's panel discussion on "Resources: what are the limits to growth?"

APEC (Asia-Pacific Economic Cooperation) promotes open trade and economic cooperation throughout the Asia-Pacific region. Professor Klare will join regional and global business and political leaders at the CEO Summit, a forum to exchange ideas and search for solutions.

While the United States is a member economy and will be represented at the summit by Secretary of State Hillary Clinton and many business executives, Klare is only American academic appearing on the program.

Director of the Five College Program in Peace and World Security Studies (PAWSS), Klare is the author of 14 books, with subjects ranging from global security issues to the struggle over the world's last resource reserves.

His most recent book, The Race for What's Left: The Global Scramble for the World's Last Resources, explores the haunting reality of what may be the planet's final "gold rush," with governments and corporations seeking to secure dwindling supplies of vital natural resources. He argues that only by altering our consumption patterns altogether—embracing renewables, efficiency, and alternative materials—can we avoid political, economic, and environmental catastrophe.

Klare is widely known outside of the United States for a global analysis that looks at the rise and fall of powers through the competition for resources. He thinks this analysis is what led to the invitation to appear at APEC's CEO Summit.

Summit materials state that the panel Klare is on "will focus on the availability and efficient use of resources in order to ensure sustainable growth." Discussion will include concerns central to Klare's work, such as energy efficiency and judicious use of food and water supplies.

"I will argue that Asia will need vast increases in resources to sustain its growth," Klare indicated. "The temptation will be to rely on traditional resources like fossil fuels, but most of the 'easy' oil and 'easy' everything else has now been consumed, producing fierce and dangerous competition for what's left.

"It's essential that Asia-Pacific economies accelerate the development of renewable fuels and other alternative materials. This is an area where cooperation among the economies of Asia will not only spin innovation but reduce the risk of friction and conflict."

This is the seventeenth annual APEC CEO Summit, and the first held in Russia. According to the summit website, more than 700 executives are expected to participate.