Study Abroad: A Semester in Madrid

Studying abroad provides all kinds of surprising benefits, new skills learned and new ideas encountered. For a Hampshire student, it also means getting good at explaining Hampshire in the language of your host country.

Last spring, I was an exchange student at the Universidad Complutense, in Madrid. Developing the language skills necessary to explain Hampshire's interdisciplinary and self-directed structure wasn't my goal, but turned out to be an inevitable part of working toward fluency through immersion.

The main draw for Complutense was literature. My studies at Hampshire are around the question of how literature and place interact, a question that has led me to read stories from around the world—and, of course, called for going abroad.

Working with Hampshire's Global Education Office, I discovered Complutense. The university, founded in 1298, has a Spanish-language literature department that is consistently ranked the best in the world. It's also, like Hampshire, a member of the aptly named International Student Exchange Program, or ISEP. The program allows students from hundreds of schools in over 70 countries to study at any one of the other schools, with a little support and a lot of self-direction and autonomy.

So much, in fact, that the experience was sometimes wonderfully terrifying. I found myself in an accidentally broad range of literature classes—including one for graduate students and one for freshmen. I opened a bank account. I rented an apartment with a student from Greece and another from Germany, and fought to have someone fix our showerhead. I made friends, learned my way around Madrid, and found the best calamari sandwich. I read books and wrote essays, attended lectures, took every opportunity to travel, and got to know my neighbors. And all of it was in Spanish. 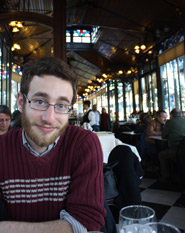 Late in the spring, I got an email from Hampshire, saying that I needed to write and submit a proposal for my Division III (senior) project. At first, it seemed like an email from another world. Then I realized what it really was: a reminder of how I had gotten to Madrid and Complutense, and how I was prepared, through self-direction and a lot of autonomy—sometimes so much that it's wonderfully terrifying—for a semester navigating that university, and that city.