Thinner Than Skin is Professor Khan's fourth novel. It tells the story of Nadir, a photographer from Karachi who lives in San Francisco and travels to Kaghan Valley in northern Pakistan one summer. Accompanying Nadir is his partner Frarhana, who is Pakistani-American.

"He is hoping to be inspired by the landscape. She's hoping to connect to a country she never had a connection with," Khan says.

The pair's arrival causes quite a stir in the lives of the nomadic community who spend their summers in Kaghan Valley. "They've been living off the land for years. They have a natural rhythm that's being disrupted," Khan says. "This group shows up and doesn't understand that they're intruding." 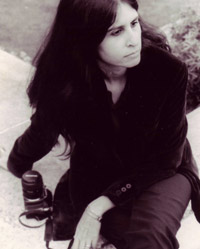 "The book asks who has a right to enter a space, and whose space is it?" Khan says. "It's about geographies, movement, home."

Fall semester 2012 is Professor Khan's first semester at Hampshire College, after teaching the past four years at the University of Hawaii.

"I'm happy to be in a small liberal arts college," she says, noting she appreciates the rapport with her colleagues and the smaller class sizes at Hampshire.