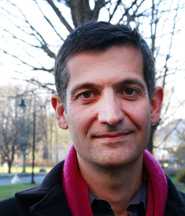 Are living things involved in the creation of minerals?

The funding will support the group, with the inclusion of six students, in field and laboratory research aimed to determine whether or not microorganisms play a role in formation of the carbonate mineral dolomite in the salty terrain of California's Deep Spring Lakes.

"It's relatively rare for dolomite to be formed in modern environments. In the scientific community, there's some debate on how it's formed. One thing we think is that microorganisms might be playing a role in the mineral's formation, creating conditions favorable to precipitate out of solution. That's what we're going there to study," said Professor Tor.

"Andrew was studying the diversity of bacteria out there. The lake is not well studied, and few people have gone out to take samples," said Tor. "He did good preliminary work."

"This could be part of another proposal to NASA when their next funding cycle opens up. It may be of interest to NASA because carbonates have been discovered on Mars, so there's potential that this research could contribute to our understanding of mineral formation and the potential for microbes to mediate the process," said Tor. "You can learn a lot about the past by studying modern environments, and this research will help us build a better proposal to bring an astrobiology institute here."

The professors and students will spend a week collecting samples and performing experiments around Deep Springs Lake, examining how microorganisms might affect the formation of carbonate minerals in the lake. Three additional weeks will be spent in Hampshire's and other consortium laboratories conducting more research and delving into the raw data accumulated during the field research.

Tor noted that the work will also be the basis for long-term research and education on campus: "These samples that we collect will be used in Hampshire classes like geomicrobiology," he said, adding that the study of microorganisms with the potential to contribute to mineral formation has become a focus of his own research.