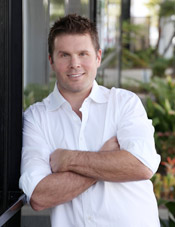 The impact of a recent $100,000 gift by alum Eugene "Rod" Roddenberry 92F's Roddenberry Foundation has already been felt at Hampshire. But the main goal of that gift is to help students make an even bigger impact once they leave the College.

"Hampshire has got all this great, useful stuff created on campus, and sometimes it's hard to get it out into the world," said Colin Twitchell, instructor for design and innovation for social change. "This can really help turn that around a bit."

The Roddenberry Foundation's gift provides funding for annual grants that aid in development and field-testing of prototypes of student designs, support student start-ups, and create and support project-based courses.

The son of Star Trek creator Gene Roddenberry, Roddenberry noted that the foundation is looking to solve problems and challenges with long-term, creative thinking similar to those popularized through the iconic science-fiction franchise. Roddenberry visited Hampshire in October 2012 to screen his documentary film Trek Nation, a chronicle of his cross-country trek to both learn more about his father and see just how Star Trek and its vision of the future has affected others. He noted that the foundation exists to try and make some of those futuristic accomplishments realities sooner rather than later.

"I've heard fans say, my entire life, 'won't that future be great? Too bad I won't be here. It would be nice to live in a future like that.' The impetus is, let's stop waiting and let's make it happen," said Roddenberry. "There are tremendous innovators out there today. I want to use the family name to inspire people to take action now to make that future a reality."

Twitchell noted that several projects have already gained momentum through the grants. Among them are:

This sort of support, Twitchell said, is essential to helping students take their studies and turn them into productive businesses in the future.

"You've got an idea in intangible form, but what's next? The funding and classes provide experience and teach about that," he said.

Hampshire College's Creativity Center is using the Roddenberry Foundation funding to support a grant program for all members of the Hampshire community who have innovative ideas in development or prototype. Applicants will be able to seek assistance up to $10,000 for their projects. The deadline for submission is March 15, 2013, and all proposals and questions should be sent to creativity@hampshire.edu.