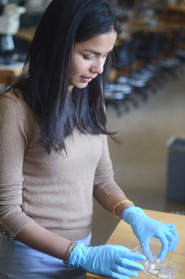 How can you tell if the food you're eating is as healthy as it appears?

For her Division III project, Priyanka Basnet 09F examined that question on a tissue level. Using Laser Ablation Inductively Coupled Plasma Mass Spectrometry (often shortened to the acronym LA-ICP-MS) at Hampshire's Cole Science Center, Basnet's research determined which trace metals were contaminating specimens of rice, as well as where in the rice the contaminants were located.

"Making a visual map of where the distribution is of these trace metals at tissue level hasn't been done before," said Basnet, who began working on the project as an intern with her Div III chair, chemistry professor Dula Amarasiriwardena.

Basnet, who grew up in Nepal, came to Hampshire with the intention of focusing on gender studies. But after taking botany professor Lawrence Winship's course Local Food Systems, she found that she was more interested in agriculture, soil, and sustainability measures.

Amarasiriwardena was Basnet's first-year advisor, and taking his course Pollution and Our Environment sparked an even deeper interest in science.

"I realized that if I wanted to really understand these issues, I needed to take chemistry," said Basnet. "Dula works a lot with trace metal contamination, and I became interested in the effect of trace metals in our food cycle."

Basnet would go on to take several classes with Amarasiriwardena, and the internship with him in summer 2012 led her to examine trace metal contaminants in feathers and rice using LA-ICP-MS.

"I had used it in class, but I'd never had an opportunity to run it myself. By the end of the summer I was able to do that," she said. "It was such a great opportunity, because it's hard for international students to get good science internships."

For her Div III (which included microbiology professor Jason Tor as a faculty committee member), Basnet had developed a method to test the ways trace metals had been absorbed, and the focus was on rice samples collected from downsteam villages near the Xikuangshan mine in the Hunan Province of China.

"That's the world's largest antimony mine," said Basnet. "Antimony is a really toxic, carcinogenic element. There has been a lot of long-term mining activity there, with no proper method of disposing of waste. There are villages right next to the mine. Contamination is going into the streams and the rice paddies in the vicinity."

As expected, the rice did show heavy contamination, and through the LA-ICP-MS Basnet could see that it was mostly ending up in the rice's husk and bran.

"Brown rice is seen as a healthier option than white rice, but the bran in brown rice is intact. You have to consider where it's grown," she said, noting that most other trace metals aside from nutritionally essential zinc (which aggregates in the rice embryo) also tend to stay in the husk and bran.

Basnet's Div III breaks down the analytical technique used to reach these conclusions, the ways in which the technology could be used to address public health issues, and then the chemistry behind trace metals and how they are transported into the rice plant and the areas where they aggregate.

Basnet appreciated receiving both the Society for Analytical Chemists of Pittsburgh-Undergraduate Analytical Research Program Award, which funded her summer research, and the Luce Initiative on Asian Studies and the Environment (LIASE) Grant, which supported her field research in China. She also received a travel award from the Society for Applied Spectroscopy to present some of her research at the SciX 2012 Spectroscopy Conference,

After Hampshire, she plans to earn a Ph.D. related to environmental health and toxicology. She also hopes to eventually return to Nepal and put her knowledge to use there.

"I'd like to go back and contribute somehow. So many people in Nepal don't have the opportunity that I've had," said Basnet, who credits Amarasiriwardena with helping her achieve so much at Hampshire. "If not for him, I wouldn't have gotten into chemistry. He believes in you, and pushes you. I've never been so engaged and passionate about learning."