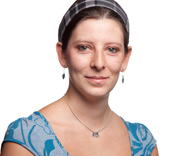 To Hannah Todd 03F, Hampshire's theatre program stands out. "No other school has a program like it, completely student-run," she says.

"Being on Theatre Board was like helping run a small theater company," Todd continues, "which is what I'm doing now."

Todd is the director and co-founder of We Happy Few Productions, a theatre company in Washington DC "with the mission of presenting stripped down, small cast, ensemble productions with a group of talented artists, providing unique perspectives on classic texts," she says.

We Happy Few is currently performing The Tempest at Capital Fringe. Shakespeare's last play, The Tempest calls for plenty of magic and illusion, and pushed the limits of ingenuity for Elizabethan theatre makers. Todd's company has reimagined the work, conjuring the island and its magic with nothing but the bodies and voices of eight actors, original a cappella music composed by the director's father, John Todd 73F, and Shakespeare's words.

Todd started We Happy Few last year with friend and colleague Raven Bonniwell. Todd says it began with "talking about putting our own projects together, making our own opportunities to do the kind of work we wanted to do."

The impulse led to a 90 minute, six-actor version of Shakespeare's longest play, Hamlet.

That production "was a huge success, so much so that people kept asking us what was next for We Happy Few," Todd recalls. "That was when we realized we really had something on our hands that was worth continuing and growing."

The company is "going strong," she says. "We've also just become fiscally sponsored through Fractured Atlas, which is very exciting."

Next, Romeo and Juliet will be getting the We Happy Few treatment this summer. After that, the company will have to go on without her, as Todd begins an M.F.A. program in directing at Northwestern University next fall.

She attributes the gumption to start We Happy Few, as well as much of her success as a director in DC, to Hampshire's theatre program. "In no other program would I have had the opportunities or experiences I did," says Todd.

"Without a doubt I would not be where I am now without it."