While reading online one day, Andrew Lavender 11F came across a Wikipedia entry that introduced him to a historical incident he had to know more about. 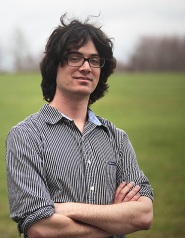 While reading online one day, Andrew Lavender 11F came across a Wikipedia entry that introduced him to a historical incident he had to know more about:

The Houston Riot of 1917 grew out of a series of events that escalated racial tensions between an African-American battalion and white townspeople. During the riot by 156 soldiers, four soldiers and 16 civilians were killed. In a case that eventually worked its way up to the desk of President Woodrow Wilson, the rioting soldiers were tried by three courts-martial, with 19 executed and 41 given life sentences.

What he read - and what he felt he didn't read - about the dynamics of the Houston Riot fascinated Lavender. He went to the library to find everything available on the topic. Primary source materials used in his research included African-American newspapers from the period as well as the NAACP magazine, The Crisis, edited by W.E.B. DuBois. These publications chronicled reactions around the country to what had happened in Houston.

"I got immersed in the time period," says Division III student Lavender. "That helped me figure out what I was going to write about." His Hampshire thesis focuses on African Americans and the military from Reconstruction through World War I. Its two central events are the Houston Riot and an earlier Texas incident, the Brownsville Affair of 1906, which also involved racial tensions between townspeople and African-American soldiers.

In the Brownsville Affair, a white bartender was killed and a white police officer wounded by shooting in the streets. Infantrymen stationed at Fort Brown were accused, but no individual could be identified. President Theodore Roosevelt dishonorably discharged all 167 members of the regiment for a "conspiracy of silence." In the 1970s, the Nixon administration reversed the dishonorable discharges.

The title of Lavender's Div III is "African American Soldiers, Jim Crow, and Theodore Roosevelt: The Construction of a Gendered, Racialized Nationalism, 1898-1917."

Lavender started his college years intending to major in philosophy. Politics and economics also intrigue him, but after transferring into Hampshire he found history to be his true academic passion.

"All the things I'm interested in can be fit into history," he says. "That includes philosophical questions about the relationship between power and history, and who controls history. I'm particularly interested in history from below and social history."

Lavender appreciated the academic freedom at Hampshire, which is a national leader in the percentage of graduates who have gone on to earn PhDs in history. Working with his faculty committee, he was able to frame his own questions and pursue research related to race relations, class interactions, and gender issues. In fact, he says: "The thing that surprised me most was how prominent gender came to be in the Div III. Understandings of masculinity became a much bigger part of what I was thinking about because of how closely gender and race are connected in America."

He plans to attend graduate school in history, but first will return to his hometown of New Milford, CT, where he has a position lined up as a substitute teacher in the nearby Ridgefield schools.

Recent Graduate Robert Ditto 17F’s Work with the Smithsonian Helped Make Freedmen’s Bureau Archives Available to All
“It’s important to pay attention to whose histories get told and how they get told,” Ditto said. “So what is discussed and what we decide to put on display is really important.”
Read Article
EMT and Artist Andrew Sapini 17F’s Div III Art Show Focused on the History of the Emergency Medical Service
Recent graduate Andrew Sapini, who is currently completing nursing school, created an art show focused on the history of the Emergency Medical Service for their Div III.
Read Article
Brooke Huguley 17F Examines How Reproductive Justice and Embodied Movement Can Heal Trauma
During a field study in Ghana, Huguley performed doula work at a small rural hospital. This experience became a catalyst for her research on birth inequities and how to disrupt them.
Read Article
Stay In Touch
With The Communications Office
Snail Mail
Office of Communications
Hampshire College
893 West Street
Amherst, MA 01002
Phone + Email
413.559.6062
communications@hampshire.edu