"Guarding the Doors of Our Dream Palaces" 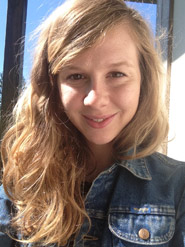 Drummer describes it as "a revisionist feminist history project," focusing mainly on the usherettes and their place in cinema history. Usherettes served multiple roles. "They were performative, and played an aesthetic and ornamental role. They also kept order in the theaters," she says.

Usherettes were a feature of "movie palaces"—grand, elaborately decorated theaters prominent between 1910 and 1950. "[Movie palaces] were giant cinemas with elaborate lobbies and ornate bathrooms with scores of servile attendants," Drummer says.

Usherettes attracted Drummer's attention as a research subject because they had not been extensively studied before. "My argument has to do with the fact that usherettes are peripheral, marginal people in theaters, and have long been ignored in cinema history. They aren't deemed important by the mainstream historical canon," she says.

Drummer researched movie palaces and usherettes at sites all over the country, including the UCLA Film and Television Archive, the Museum of Modern Art film study center, and the William K. Everson Collection at New York University. From there, she constructed a history of usherettes based on the fragmentary information that remains about them.

"I did intensive primary research, which is not something that everyone gets to do as an undergraduate. [At times] I was frustrated by what I didn't find, but I needed to make sense of what I did find," she says. "I was very excited and fulfilled by doing a project that was both critical and creative in nature, and sort of filling in the gaps that the critical piece had with the creative piece."

The result of Drummer's research is a 70-page research paper, and what she describes as an "experimental documentary" made using archival images and footage, with footage Drummer shot at an abandoned movie palace in Brooklyn. Drummer shot the documentary using eight-millimeter film.

Both her film and research paper will be archived in the Hampshire College library.

Drummer's research was greatly aided by several Hampshire College financial grants and awards. Among them were the Creativity Center's Innovation and Experimentation Award, a Sander Thoenes award, a grant from the David E. Smith Endowment, a Tom Joslin Internship Award, and the Five College Lorna M. Peterson Prize.