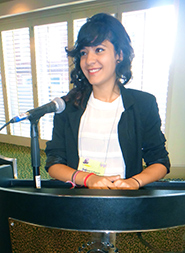 Third-year Hampshire College student Yasmine El Baggari 11F was selected to speak at the 2013 Middle East Studies Association Conference, held in New Orleans. El Baggari presented research on women's empowerment and the education system in her native Morocco, and the implications of a multilingual education system, as Moroccans typically speak French and Arabic.

"As a Moroccan who has been educated under a multilingual system, I have experienced its flaws first-hand, and I feel the need to analyze the implications of this system," she said.

El Baggari says her experience at the conference was invaluable. "I'm very excited to have represented Hampshire College as an international student from Morocco," she said. "I am still invigorated by the experience. I had the chance to network with experts from all over the world."

Associate Professor of Integrated Science and Humanities Salman Hameed and Assistant Professor of Middle Eastern Studies Hiba Bou Akar also attended the conference. El Baggari has worked closely with both professors and praises their inspiration and guidance in her studies at Hampshire.

In addition to research in Morocco, El Baggari has been conducting research on the migration of Muslim students from North Africa to Europe, specifically looking at the development of their identity in Germany, Belgium, the Netherlands and France. She conducted 35 interviews "to evaluate the most pressing challenges" faced by college students, she said.

El Baggari will also attend the African Association Conference in Baltimore in November.