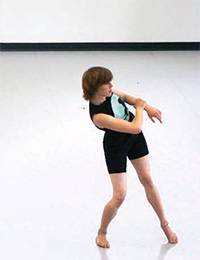 Miles Firkins told herself in high school that in college, dance would be secondary. She would find another, more practical area of study to focus on, and dancing, well, as always, dancing would be fun.
"Then Hampshire happened," says Firkins, who just began her second year at the College. "Now I'm concentrating on dance."

The decision came pretty quickly, soon after her courses began revealing how much more she had to learn about the field. Taking the Dancing Modern I class with dance and movement studies professor Daphne Lowell was Firkins's first step toward studying dance full time.

"That class blew my mind," Firkins says. "It opened my eyes to all the movement opportunities I'd dismissed. She had us doing readings, exploration of anatomy, how to use anatomical structure to make movement easier and to build muscles so that they're useful and not getting in the way." It was a lesson Firkins says she appreciated. Movement had always come naturally, with a passion she developed on dance floors while watching her dad play in his salsa band Son Como Son. But now she had to take a step back to see what exactly had influenced many of the formal movements she had learned over the years.

"In the greater dance world," she says, "you learn technique and how to do things with your body, but you don't learn where movement comes from. Hampshire's really good at teaching that. There's all of this history and politics wrapped up in the way we use our bodies. No one ever told me that this is a thing, something distinctive that should be thought about," she says.

"It was five hours a day, with two hours of movement, three hours of discussion, and a paper to be written every night, and this is a dance class, mind you," she says, laughing. "It was incredible. I learned from Fritha that being a dancer doesn't mean you need only technique. In the academic sense, you need to have technique, but the theory and the history, knowing why you do what you do, are just as important."

Taking that theory and history into performances has been exciting, Firkins says. Noting "I danced more than I ever have in my life" in her first year at Hampshire, Firkins performed in three student productions, sang with the chorus, and became deeply involved with the collective Circus Folk Unite!

"An acquaintance in dance said I do things that allow me to be a big kid while being a big adult. Circus is all about being silly, and being powerfully silly," Firkins says. "Circus and dance are beautiful together. I'm doing many good things that I never thought I'd have the opportunity to do."