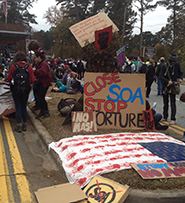 Hampshire College was well represented at the annual School of the Americas Watch vigil in Georgia this past November, as more than three dozen students made the 20 hour trip to Fort Benning to protest the controversial Western Hemisphere Institute for Security Cooperation (WHISEC).

"We were the largest student group there, which was kind of surprising," said Tika Lifton-Herman 12F, an organizer of the trip.

Founded as the School of the Americas in the 1940s to provide military training for Latin American government personnel, WHISEC has long been accused of being a training ground for some of the worst perpetrators of human rights abuses in dictatorial governments throughout Latin America. SOA Watch was formed in 1990 to work to close the school, and their annual vigil at the gates of Fort Benning, where WHISEC is based, focuses attention on victims of those regimes.

The story of Nieves Ayress, a survivor of torture and imprisonment at the hands of Alberto Pinochet's regime in Chile in the 1970s, inspired Lifton-Herman, Svenja Schwarz 13F, and others to take part in this year's vigil. Ayress visited Hampshire in September with the activist hip-hop group Rebel Diaz as part of the "Chilean 9/11: 40 Years of Struggle" tour. WHISEC's graduates include members of Pinochet's intelligence agency, accused of many of the worst human rights violations that took place during his nearly two decades in power. Ayress and other Chilean torture survivors shared their often-brutal experiences.

"It showed how strong people sometimes have to be to stay alive," said Schwarz, an exchange student from Germany studying North and Latin American studies with a focus on culture and economics.

The "Chilean 9/11" tour was also headed to the SOA Watch vigil, and sociology professor Margaret Cerullo, whose students in the course Social Change: Zapatismo & Latin America's Third Left were among those attending the event, suggested they organize a group to go. Schwarz and Lifton-Herman quickly set to doing that.

"Lots of first year students came. Hampshire is a very strong place for political activism, and this was a good introduction," said Schwarz, while Lifton-Herman noted that the long bus ride to Georgia was a bonding experience, as was a teach-in about the School of the Americas held a week before the trip. "We wanted to make sure everyone who was going was informed about why we were going."

The group spent the first day of their trip in workshops organized by SOA Watch, followed by the vigil on Sunday. The wide variety of the workshops, and the new connections made at those sessions with students from all over the country, proved especially memorable to many of the Hampshire students.

"The workshops seem to be what sustain the movement," said Ian Sloan 12F.

Schwarz and Lifton-Herman plan to give a presentation this spring about their experiences during the trip, and hope an even larger group will take part in the SOA Watch vigil next year.

Jamie Citron 01F Named to Biden-Harris Transition Team
Former Obama White House staff member and longtime director of development strategy at the Obama Foundation, Jamie Citron 01F was recently named to the Biden-Harris transition.
Read Article
Seeking Justice for the Disenfranchised
A Hampshire alum links her work as a civil rights lawyer to her studies in storytelling
Read Article
Eliot O'Connell
I'm a Div II here at Hampshire. I study art history and writing with a focus in censorship. I never imagined that college could be like this.
Read Article
Stay In Touch
With The Communications Office
Snail Mail
Office of Communications
Hampshire College
893 West Street
Amherst, MA 01002
Phone + Email
413.559.6062
communications@hampshire.edu