Our Thanks to Leslie Cox, Who Grew Community on the Farm 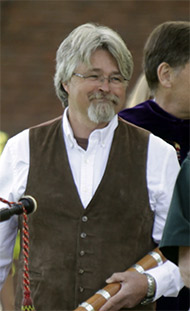 After 17 years as Hampshire College's farm manager, Leslie Cox is leaving at the end of March to become farm director for the Trustees of Reservations.

"This is an opportunity to do the kind of things I've done at Hampshire on a larger scale. I'm pretty excited about it," he said.

When Cox, his wife Elaine, and their four children moved into the farmhouse on the northeastern edge of campus, Hampshire's farm was in a transitional period. The Livestock Guarding Dog Project run by Raymond Coppinger, professor emeritus of biology, had ended. There were about 30 ewes with lambs and a small CSA.

"We began building the CSA bigger right away," said Cox. "Other things came after, slowly. Maple sugaring began during the second spring, and we were boiling under the shed near the tennis courts. The next year we put in the sugar house."

Cox shifted the focus of the livestock program to cattle, which he felt were better suited to Hampshire's land. He added chickens, turkeys, and pigs.

"I was always trying to find something students could connect with," Cox said. "I loved having them feel that the farm was their own to enjoy. That was the most important thing to me."

He helped develop the "lamb watch" portion of psychoanalysis and clinical psychology professor Annie Rogers' course Meeting Lacan: On the Couch, Through the Arts and On the Farm. Ewes in labor need people to check on them, and Professor Rogers saw an opportunity to provide students with an experience that would get them out of their normal routines and sleep patterns. The goal was to help them connect with "the associative logic of the unconscious."

"Leslie offered this magical solution," said Rogers. Cox came up with the idea over coffee at Atkins Farms, she said. "As we talked, I realized that having students do the lamb watch in pairs, in silence with the sheep, would introduce them to an entirely different world. Afterwards, each student created an artistic project based on that."

For students who became regulars at the farm, working with Cox, and with CSA manager Nancy Hansen, has proven influential.

"Leslie and Nancy were a model for what I wanted to do," said Tobin Porter-Brown 05F, who along with Peter McLean runs Book & Plow Farm at Amherst College. "I wanted to be a farmer, but also an educator as well. Hampshire provided this model of farming and education that really struck a chord with me. I hadn't had any farm experience before I came to Hampshire, so I'd say Leslie is a good part of where I am today."

Whether they became farmers or not, Cox believes that having students help with essential chores around the farm is an important opportunity, and one that ties in deeply with Hampshire's focus on supporting local food and sustainable living.

"It's such a valuable lesson. I hope for the rest of their lives they appreciate the kind of work farmers have to do to bring food to them," he said.