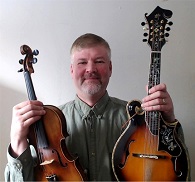 Adam Sweet 80F began studying and playing music at the age of four, when he started violin lessons. He continued to pursue music as a student at Hampshire College, and also studied animal behavior theory and psychology.

At Hampshire, Sweet met student musicians who frequently held jam sessions outside. He developed an interest in bluegrass and purchased his first mandolin. The mandolin is fingered the same way as a violin and he transitioned easily between the two instruments.

Sweet says the mandolin gave him "a sense of freedom" that he hadn't gotten from the violin. "I could take it anywhere with me," he says. He appreciates the mandolin's versatility, saying that it is "a very visual instrument" and easy for beginners to learn.

Although he has done some composing, Sweet mainly thinks of himself as a music teacher rather than a composer. He taught group music classes at the Northampton Community Music Center for twelve years, which is what got him interested in the idea of starting an orchestra.

In 2010, he was contacted by August Watters from the Berklee College of Music, who wanted Sweet to co-produce a concert of classic mandolin music. Unfortunately, the concert never happened, but the concept and preparation for it inspired Sweet to pursue the idea. He recently founded the South Hadley Mandolin Orchestra, which welcomes mandolin players of all levels of experience. Sweet hopes to revive the tradition of the mandolin orchestra, which was more common in the United States at the beginning of the twentieth century. The orchestra now has a staff of volunteers, and features numerous musicians and composers. They had their first rehearsal in February and will have their first concert in September.

Sweet encourages aspiring mandolin players to find good teachers who know the instrument well. He also suggests that mandolin players should join jam groups. "Playing with others is the best way to learn," he says. Finally, he recommends going to as many concerts as possible and to listen to mandolin music frequently: "Surround yourself with it … Listen to it all the time."

Sweet is fascinated with the history of music and is interested in a variety of genres—including classical, Celtic, acoustic Americana, bluegrass, folk, and Middle Eastern music. As well as the violin and the mandolin, he also knows how to play the viola, guitar, bass, bouzouki, and erhu. He has played music all over the world—in Ireland, Belgium, Austria, Germany, Switzerland, South Korea, China, and Egypt. He teaches from his own studio in South Hadley, The Sweet Music Studio.