For his Division III thesis, the 2015 Commencement student speaker authored a choreopoem on a theme spanning Harlem race riots to Black Lives Matter

Jorrell Wakins was voted by his classmates to represent them as student speaker at the 2015 Commencement ceremony, held on Saturday, May 16, 2015. For his Division III thesis in his final year at Hampshire, Watkins authored a choreopoem on a theme spanning Harlem race riots to Black Lives Matter.

Here is an overview of Watkins' Division III, titled "Harlem Vanguards," in his own words: The Black Lives Matter movement inspired me to do this project. You can look at what’s happening now through a historical lens. Someone who read my choreopoem actually thought he was reading a variation on what happened in Ferguson.

A choreopoem is a creative vessel that can hold poetry, music, and movement, and it allows for a range of different arts that can be used in collaborative work. I came across it when I saw a performance of Ntozake Shange’s For Colored Girls Who Considered Suicide/When the Rainbow is Enuf at Mount Holyoke. I was taken aback because it was what I was aiming to do. Since high school I’ve been interested in history, poetry, and dance. Seeing that performance ended up changing the direction of my Division III. Through it, I looked at the Harlem race riots of the 1960s—sparked by the police shooting of fifteen-year-old James Powell—especially how youth activism resulted in the resistance movement.

Several characters in my choreopoem come from the groups I researched. One was Harlem Youth Opportunities Unlimited, also known as HARYOU, which received over $1 million from the federal government to figure out how to address the ills affecting Harlem youth. It was something of a precursor to the War on Poverty. HARYOU was forced to merge with another group, Associated Community Teams, as part of the effort and it caused leadership conflicts and turf battles over who was really looking after Harlem youth.

Another group was the Blood Brothers, supposedly a karate-and-judo-trained anti-white gang that was also fighting the police. They were featured in a series of stories by Junius Griffin in The New York Times, which created hysteria in New York City in 1964.

Academically, my faculty committee members Amy Jordan and Aracelis Girmay pushed me, and helped me develop my method. Taking Chris Tinson’s course Freedom Dreams when I was a first-year was also eye opening and encouraged me to study history.

I produced a staged reading of Harlem Vanguards at Word!, a Five College festival, in March. I think I got the language and the poetry right, but there’s more I can do. Over the next two years I hope to revise the work, and when I have the space, I hope to present it again.

My first step after Hampshire will be working as the co-artistic director for the production of a classmate’s play—Andrew ‘Fig’ Figueroa's “The Mixed Race Mixtape,” which goes on tour this fall. I want to spend time in the arts, and I feel at Hampshire I gained an understanding of the discipline needed to do this. Eventually I’ll go to grad school.

Aracelis Girmay on Jorrell's Division III: Jorrell’s research topic, questions, and artistic modes changed and deepened the more he came to understand his own priorities and interests. As a committee, we watched him grow and wrestle to hone his ambitious project, and I am astounded by the breadth of his thoroughly researched Division III. It not only grows out of his commitments to researching youth activism in Harlem in the 60s, but seeks to link—through research, poetry writing, and performance—radical black youth movements of yesterday and today. Doing what history and art, in my mind, do at their best, his work shows us the ways we are all crossed, born, made up of history—and how the imagination is, in many ways, the site of resistance and/or the site where violences are perpetuated.

Amy Jordan on Jorrell's Division III: The way Jorrell chose to deal with the subject of the Harlem race riots was compelling. He was trying to work out the relationship between historical research and creative writing. In the beginning, he really saw historical research as separate from performance and creative writing. But during Division III he started to break down those boundaries. Through some of the questions we asked him over the course of the year he began to take ownership of the project, and see what he wanted from it. It was great to see his ideas flower.

View videos of Jorrell's Commencement speech and of all the speakers at 2015 Commencement:

View photos of Jorrell and others participating in 2015 Commencement: 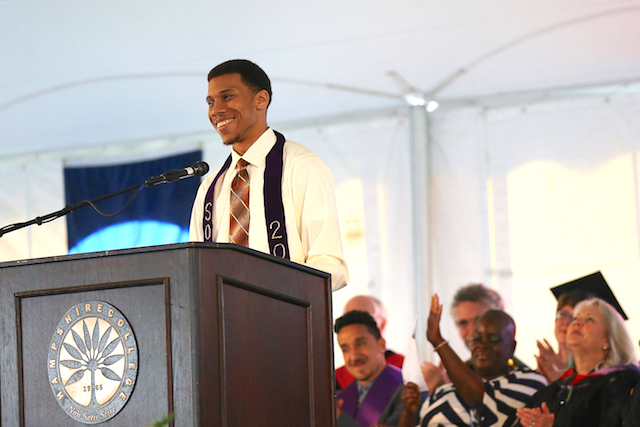