And so begins the Hampshire education designed for active users, “hard on passivity,” spaces for creativity, and a demand for personal commitment.

Empathetic. Voyeuristic. Unsettling. Intimate. Complex. One by one, thirty students volunteer a single word to describe James Baldwin’s The Fire Next Time, the book they’d been assigned months ago as the College’s common reading. It’s their second day as Hampshire students.

Day two of Orientation Weekend is in full swing, and the new students soon break up into small groups throughout the Liebling Center to delve into the book in detail. As they get to know their classmates—and the professors who will be leading their first-year tutorials and serving as their advisers—they’re quickly becoming familiar with the critical thinking and dialogue that drive a Hampshire education.

“I love these discussions, and going outside to sit under the trees to ponder the questions, and the esoteric conversations that seem to occur spontaneously at Hampshire,” says Dante Mena, a Bronx, New York, native whose primary interest is mathematics.

“It’s exciting, but I’m also nervous,” says Cristina Alvarez, who plans to study architecture, as she waits in line for her ID-card photo. “I learned about Hampshire when I took a tour a year ago, and they told me how everything works. I really liked it, but it’s still kind of nerve wrenching to know that my first year is about to start.”

At Orientation’s welcome ceremony, Dean of Enrollment Meredith Twombly talks about the diversity of the more than 400 members of the incoming class of 2015. Thirty-one percent are students of color and 18 percent are the first generation in their families to attend college. The “ultimate expression of diversity,” Twombly says, is that the students’ arrival marks “the birth of 430 unique, never-before-imagined, self-directed programs of study.”

President Lash encourages students to dive in to campus life. “The entire education is basically up to you to make happen,” he says. “You’ll have devoted faculty partners and attentive academic support systems, but you are the owner and operator. Hampshire offers a great educational approach that’s designed for active users, but the school is hard on passivity. It rewards inquisitiveness, opens space for creativity, and demands commitment.”

As he closes his introduction, he sets the tone for the academic year to come: “Let’s have a great time together, and do some things that matter.”

The students and staff who manage Orientation do their best to calm the natural anxiety of entering students. Some volunteers do handstands, others break into dance to welcome them and their families as they drive onto campus for check-in (watch video). Volunteers also make sure students can find their way across campus; help carry their mini-fridges, guitars, and other bulky items up to their dorm rooms; and serve lunch. 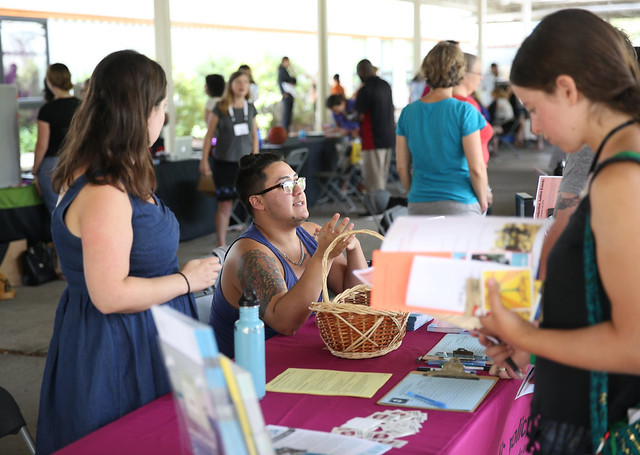 Eliot O'Connell
I'm a Div II here at Hampshire. I study art history and writing with a focus in censorship. I never imagined that college could be like this.
Read Article
Hampshire to Offer 12th Annual ‘Super 8 Filmmaking in Paris’ Course This Summer
Course is deeply connected to our Hampshire philosophy and inquiry-based learning
Read Article
Seeing the Forest for the Trees, and Much More
Student work examines forest systems and precipitation, including the threats and impacts on climate change
Read Article
Stay In Touch
With The Communications Office
Snail Mail
Office of Communications
Hampshire College
893 West Street
Amherst, MA 01002
Phone + Email
413.559.5482
Fax: 413.559.5720
communications@hampshire.edu