Prof. Andrea Dezsö was recently nominated for the 2016 Astrid Lindgren Memorial Award (ALMA), which describes itself as the “world’s largest children’s literature award.”

“I try to model different ways artists work in the real world, and create a sustainable practice where one work turns into another and another,” says Dezsö, associate professor of art. “Because I have such a wide-ranging practice, my students can see the many different ways one can practice art.”

Dezsö was recently nominated for the 2016 Astrid Lindgren Memorial Award (ALMA), which describes itself as the “world’s largest children’s literature award.” She’s one of 215 candidates from 59 countries whose names were announced at the Frankfurt Book Fair in October.

ALMA recognizes creators of literature whose roles take many forms: nominees comprise not just writers and illustrators but also storytellers, along with individuals and organizations that promote literacy. The final laureate or laureates of the 2016 award will be announced immediately following the jury’s final meeting, on April 5.

Her nomination follows the recent success of The Original Folk and Fairy Tales of the Brothers Grimm, which became a hit soon after its publication, in fall 2014. She illustrated Jack Zipes’s translation, the first in English of all 156 stories from the brothers’ original 1812 and 1815 editions.

“It was a surprise for all of us that it drew all this attention,” says Dezsö. “We originally thought it would just be of scholarly interest. I felt I had to do this project—it was a wonderful opportunity to illustrate some of the most defining stories of my childhood.”

Dezsö’s “tunnel books,” elaborately layered and lit dioramas that can be as small as a book and as big as a room, are featured in the solo exhibition Dreamtime at the Virginia Museum of Contemporary Art through December 31.

Another solo exhibit, I Wonder, will highlight a variety of her work at Tulane University’s Newcomb Art Museum, in New Orleans, January 20 through April 10.

“I’ll be making a new piece for the show that’s site-specific, related to the community and history of the very interesting, exciting experience that is Mardi Gras, with all its pageantry and role-playing and festivities,” she says. 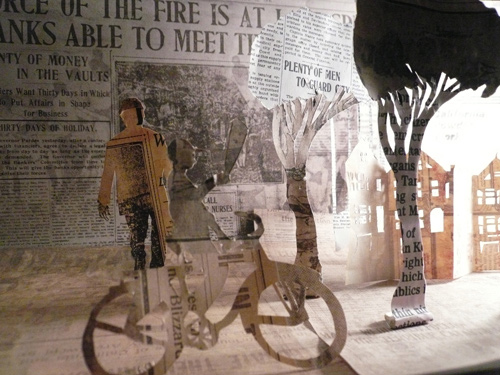