A New York exhibit co-curated by Hampshire Professor Wilson Valentín-Escobar about the history of the revolutionary, paramilitary, Puerto Rican organization the Young Lords Party has been named one of the best shows of 2015 by prominent critics and publications.

The exhibit that Valentín-Escobar co-curated at Loisaida Inc. Center was part of a three-part show titled "¡Presente! The Young Lords in New York," that included joint exhibits at the Bronx Museum and El Museo del Barrio. The show recognized the significance of the Young Lords Party and the resulting activism that brought about important social change beginning in the 1960s.

Ben Davis at Art World on ArtNet.com named it one of the top 20 New York Museum Shows of 2015, writing about Valentín-Escobar’s work: “Not to be missed: the section of the exhibition at Loisaida Inc. on the Lower East Side, which spotlights the group's Gay and Lesbian Caucus, an initiative that smashes stereotypes by showing the Young Lords to have been one of the most forward-thinking left-wing groups on issues of sexuality in their pre-Stonewall days.”

The popular art forum Hyperallergic also named the exhibit one of its top 20 NYC Art Shows of the year.

About the recognition for the exhibit co-curated with Libertad O. Guerra, artistic director of the Loisaida Inc. Center, Valentín-Escobar said he feels their exhibit was so well-received in part because it recognized the significance of the Young Lords Party as a “para-military, grassroots, radical, civil and human rights organization” that welcomed and aligned with queer/gay/transgender activists and organizations. “This was at a time when most para-military groups were reluctant or failed to do so,” he observed.

Valentín-Escobar cited the example that Sylvia Rivera, the foremost transgender activist who led the Stonewall Riot of 1969, was a member of the Young Lords.  He explained that she remained and is regarded as the foremost transgender activist not only in NYC, but in the United States and is also hailed internationally, as well.  “With a recent Hollywood movie released this past summer, there was a ‘whitewashing’ of her radical legacy, and no mention of her involvement and participation with the Young Lords,” he said.

“The curatorial approach we undertook was about making an intervention to the dominant narrative around the Young Lords Party, and really highlighting a different aspect hardly known and under-appreciated by the public,” he said. He believes this was one reason the exhibition was so well received by community members, scholars, activists, and former members of the Young Lords Party.

Valentin-Escobar said they also took a curatorial approach of welcoming community input, particularly those of Young Lords Party members, as co-creators in fashioning a narrative and artistic vision that informed the exhibition.  For example, he said, they conducted oral history interviews with four members of the party.  Their historical perspectives were crucial to more accurately representing the party’s accomplishments, he said.

An Associate Professor of American Studies, Critical Ethnic Studies, and Sociology at Hampshire College, Dr. Valentín-Escobar also serves as Chair of the Five College Latin American, Caribbean, and Latin@ Studies Program. A Brooklyn New York-native, he is currently completing his forthcoming book, Bodega Surrealism: The Emergence of Latin@ Artivists in New York City (New York University Press). He holds a Ph.D. in American Studies from the University of Michigan.

Photos of Wilson Valentín-Escobar by Máximo Colón www.maximorafaelcolon.com; Valentín-Escobar is pictured in front of an installation piece designed by the multidisciplinary artist, Adrián Viajero Román www.viajeroart.com/projects/#/presente-young-lords-in-new-york/ 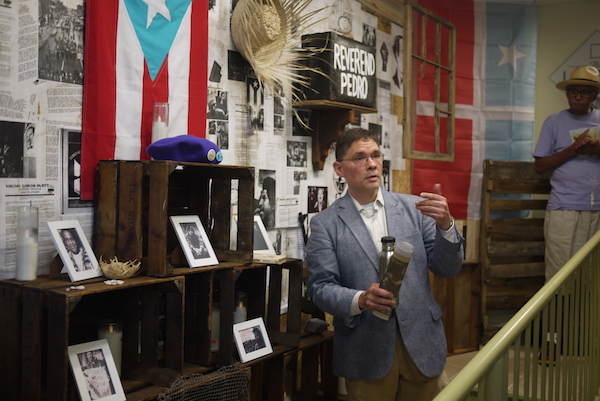 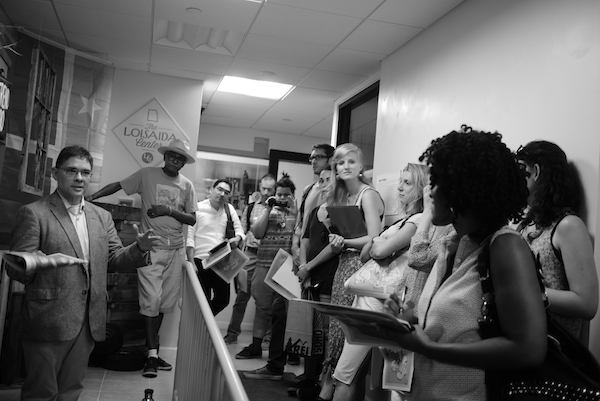