Barskova, associate professor of Russian literature at Hampshire, is one of her country’s most famous poets, and 2015 winner of Russia’s oldest independent literary award, the Andrei Bely Prize

The House of Books, St. Petersburg’s largest bookstore, won’t carry Polina Barskova’s The Living Pictures. A collection of short stories, essays, and a play that explore life during World War II's siege of Leningrad,  The Living Pictures brought her the Andrei Bely Prize, Russia’s oldest independent literary award, in November 2015, and has drawn praise from numerous reviewers. It has also brought criticism.

“The Putin government orients people toward seeing history as a wonderful, glittering historical narrative about victory,” says Barskova. “But the Soviet government neglected more than one million people, knowing they were starving during the siege. Most people don’t want to read about this. But I guess I’m in a strange kind of role. I’m the person who wants to read this.”

Barskova, associate professor of Russian literature at Hampshire, is one of her country’s most famous poets of her generation. She was born in Leningrad — known as St. Petersburg prior to 1924 and returning to that name in 1991 — and was a prodigy who began writing poetry at the age of eight. Her debut collection was released when she was 15.

The Living Pictures is her first book of prose, and the image on the book’s cover is the stated reason the bookstore won’t carry it. Artist and writer Pavel Zaltsman’s “Masks and a Woman” features a nude that the bookstore’s management says is incompatible with stories of the Nazi German siege, which lasted from 1941 to 1944; it cut off Leningrad almost entirely from the rest of the country as Germany sought to defeat Soviet Russia during World War II. Barskova, though, found the image to be an ideal match.

“Zaltsman was lucky to escape the siege,” she says. “His beloved parents died of starvation in front of him. He wrote about every taboo subject imaginable — the black market, party privilege, prostitution, theft — so we decided to put this image on the cover as a symbol of the siege that was silenced. The image produced by the witness was too daring for the keepers of the siege ‘decency.’”

Despite the bookstore ban, Barskova’s work has proved popular, and acclaimed. Last March, the play that gave the collection its title premiered at the Theatre of Nations in Moscow, where The Living Pictures has been sold out during its run. Set in the Hermitage, one of the largest and oldest art museums in the world, it’s based on the letters and diaries of a young artist, Moses Vakser, and his lover, arts historian and critic Antonina Izergina, who lived in the Hermitage during the siege. Barskova discovered their story while researching the history of that era over the  past decade.

“I wrote this play to ask, What does this conflict between art and war mean, how can art fight war, or can it at all?” says Barskova. “The main characters are thinkers and idealists, but they cannot defend themselves against history and famine.

The initial plan was to stage The Living Pictures at the Hermitage, but concern over its subject matter in Russia’s current political environment made that impossible. Its eventual staging at the Theatre of Nations, Barskova says, came about through the enthusiasm of director Victor Alferov and other young theater professionals.

“It’s important for me to work on reminding my readers what the price of the last century was,” she says, “and what the price of not caring about one single human life can be. In the process of chasing noble and sublime and huge  ideas, people are often left without defenses. I’m opposed to the state notion of heroism. I’m much more interested in studying what is human rather than what is heroic.”

Growing up in Leningrad and earning her BA at St. Petersburg State University, Barskova was intrigued by the history of the siege. Her research began in the Leningrad archives, and while that would remain her most important source for exploration of the siege of the city during World War II, information would eventually begin pouring in from other places.

“When you’re there in the archives,” says Barskova, “it’s like a treasure trove. But once people found out I was doing this research, they began sending me materials. You start talking to people and they tell you they have a diary from their grandmother, or letters from their grandfather.

After focusing on poetry for more than thirty years, the shift to prose and drama was a challenge: “You feel like you’re  at the very beginning of your writing path, which is both exciting and terrifying. You have no good or bad habits. You’re just trying to trust your intuition and, strangely enough, to have fun. 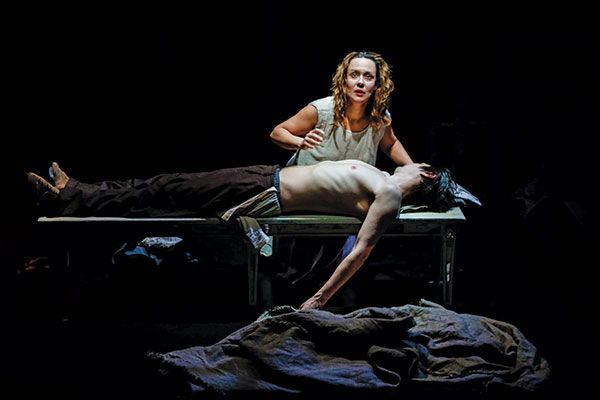