Nicole DelRosso came to Hampshire to study sculpture and left with a project holding great potential for detecting disease.

DelRosso had been accepted to an art school, but decided to go somewhere she could also take classes in subjects she hadn’t yet fully explored. “I wanted to take a neuroscience class because in high school I didn’t have access to interesting courses like that,” she says, “so I took Professor Joanna Morris’s Brain and Cognition as my first-year tutorial.” She was fascinated to learn methodology of designing experiments to test questions: “I had never been exposed to that in a way that wasn’t formulaic,” she says, “and I’d never taken a science class where we read all primary literature on what was going on in the field at that moment. That was really exciting to me.”

Morris’s class inspired DelRosso not only to continue exploring neuroscience, but also to study chemistry, physiology, biology, physics, and math. She says those courses taught her to approach biologic questions with a quantitative perspective, which led to her Division III thesis studies.

“Regeneration of Molecular Circuit Components to Perform Iterative Calculations,” DelRosso’s Division III project, came about after she was awarded the Four College Biomath Fellowship, which made it possible for her to work in the Smith College labs with Professor Nathan Derr and a team of students there.

DelRosso presented her research in April at the 13th Annual Foundations of Nanoscience (FNANO) Conference, held in Utah. “Going there was a great opportunity for me—it pushed me to talk to others in the field and allowed me to get insightful feedback on my research from experts,” she says. “It was a big stepping stone for me as a scientist.”

DelRosso focused on DNA computing, a subfield of bionanotechnology that uses strands of DNA the same way a computer uses a microprocessor, enabling her to create a programmable biological entity. The implications of her work are considerable: the synthetic DNA that DelRosso works with could be used in the growing field of programmable in vitro diagnostics; it could be programmed for the diagnosis and treatment of disease and to ensure efficient drug delivery during treatment.

For her project, DelRosso developed methods for performing computations on the genetic material of living cells, and helped to devise reusable and adaptable DNA computing systems. This summer, DelRosso is continuing the research she started with Professor Derr, who served as mentor and chair of her Div III committee.

Hampshire Professor of Math Sarah Hews and Professor of Computer Science Lee Spector rounded out her committee. “A big part of my Div III was building a model to describe my system,” DelRosso says, “so I used Sarah’s systems-level thinking and mathematics background. Lee’s computer-science and artificial-intelligence background was important, as was Nate’s biochemical background. I used all of these things to inform my work—I was very well advised,” she says.

Lee Spector said he learned a lot about DNA nanotechnology from DelRosso. “In committee meetings Nicole would give us dynamic presentations, and we would press her for details and explanations in terms that all of us could understand. This was hard,” he says, “because nobody on the committee was an expert in all of the areas involved in Nicole's project. Essentially, these meetings were sessions in which Nicole was a teacher and each committee member played a dual role, of teacher in some areas and of student in others.”

She describes her Div III as “the most rewarding thing I ever experienced—such an empowering project. To actually work on a project where the classes were informing what I was doing,” DelRosso said, “I had a purpose.”

Starting this fall, she will be taking graduate physics classes at UMass Amherst, with plans to pursue an advanced degree at the Technical University of Munich next summer. 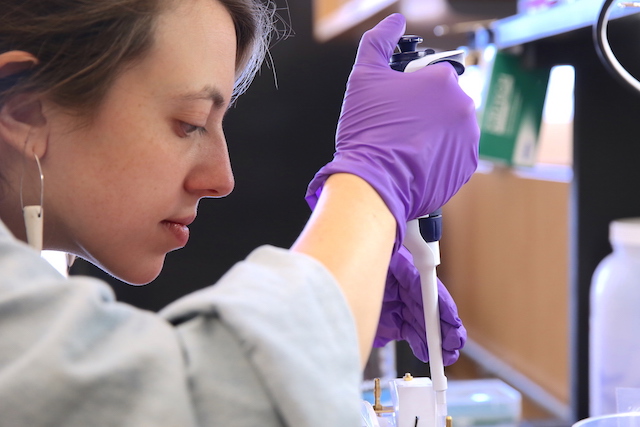 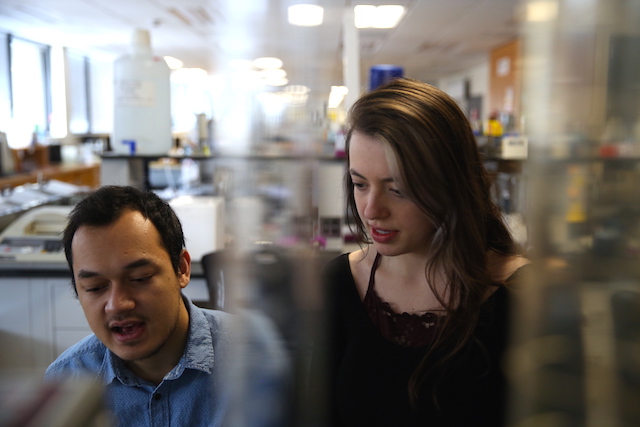