“Sound is always around us,” says Christoph Cox, professor of philosophy. “I think about sound as something that flows through human beings and animals, the entire natural world.”

Cox’s new book, Sonic Flux: Sound, Art, and Metaphysics (University of Chicago Press, 2018), examines what he calls “the notion of sound as an immemorial flow to which human expressions contribute but that precedes and exceeds those expressions.”

In the last 30 or 40 years, he says, “we’ve seen the emergence of a field of artistic production called ‘sound art,’ which is distinct from music.” He defines sound art as an intentional creation or collection of sound presented as art. As examples of the term, Cox cites a 60-minute piece created from recordings of winds in Patagonia and an unmarked installation, Times Square, by Max Neuhaus, that sits below a subway grate generating a continuous hum in one of the busiest parts of Manhattan.

The inception of sound art, Cox explains, could be understood as the cultural byproduct of a sonic forebear, the first recording of sound by Thomas Edison, in 1877.

In Sonic Flux, he writes: “Thomas Edison unwittingly disclosed, and submitted to aesthetic attention, a world of sound beyond music and speech, for this mechanical contraption registered with equal facility . . . not only the articulate sounds phonographers aimed to record, but also the noises of the environment, and the hum, hiss, and crackle of the [phonograph] itself. ”

Over the past several years, an increasing number of prestigious museums and galleries worldwide have begun curating exhibitions of sound art, among them the Whitney Museum of American Art, which featured BitStreams in 2001 and presented sound art at its 2002 biennial, an influential annual gathering of the art world.

Cox’s work straddles the worlds of academe and art. An expert on the 19th-century German philosopher Friedrich Nietzsche — his first book was Nietzsche: Naturalism and Interpretation (University of California Press, 1999) — he has also been a music journalist for Artforum, The Wire, and Index magazines and written exhibition essays for a variety of venues, such as the Whitney, the Museum of Modern Art, MASS MoCA, the South London Gallery, Berlin's Akademie der Künste, the Museum of Contemporary Photography, and the Oslo Kunstforening.

Theories about sound art can be traced to the writings of Nietzsche and Arthur Schopenhauer, Cox explains. Both musicians, these thinkers began to see music as just a way to order sound.

“Music is essentially patterns of organization, tension, and release, represented on paper as notes, pitch, and rests,” Cox says.

In early explorations of sound, as well as soundlessness in performance, some composers removed the notes and kept the rests. For example, experimental composer John Cage created 4′33″ (1952), which was four minutes and 33 seconds during which the performer(s) made no intentional sounds.

“The idea was for the audience to listen to the sounds around them, environmental sound, and that was the piece,” Cox says.

Really listening is something he encourages his students to do. In his popular course “Audio Culture: Theories and Practices in Music,” co-taught with his colleague Daniel Warner, a composer and professor of music — he often asks students to walk around campus and then write about what they hear.

“They write things like ‘the snow crunched beneath my feet,’” Cox says,  “but when they do that, they’re describing the source of the sound, not what they’re really hearing. Slowly, they become better and better listeners.”

Cox himself is a musician. He grew up singing in a choir, playing piano, and then playing keyboards in a series of rock bands in high school and college.

“Music has always been part of my life,” he says.

His interest in the intersection of music and philosophy was piqued in 1995, after the death of French philosopher Gilles Deleuze, who wrote about film, literature, and art. In 1996, in homage to his oeuvre, the independent European record labels Mille Plateaux and Sub Rosa issued compilations of electronic music dedicated to Deleuze.

“I began thinking about sound and art, so I pitched an idea to Artforum and wrote an essay for them,” Cox recalls.

The essay made its way to the owner of a then influential D.C. gallery, G Fine Art, and she invited him to curate a show of audio and visual art.

Since then, Cox has become integrated into a network of artists and musicians who experiment with sound art and write about it.

Several of them will participate in the book launch for Sonic Flux, on Saturday, November 3, at the New York City art space The Kitchen, of which Greg Feldman 74F is chair of the board. The celebration will comprise an evening of performances by artists Maria Chavez and Jake Meginsky and a discussion of the book with artist Aura Satz. 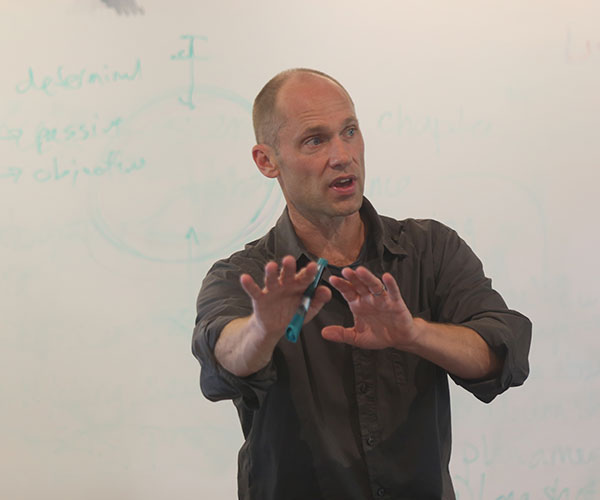 Music Professor Junko Oba Uses Listening to Explore Musical Sensibilities and Sound Cultures
Professor Junko Oba was selected for an NEH-funded summer seminar around the political, social, and cultural impacts of radio and sound technologies on decolonization.
Read Article
Fiction Professor Uzma Aslam Khan on How Teaching and Writing Interconnect as a “Living Practice”
For award-winning author and Associate Professor of Fiction Writing Uzma Aslam Khan, focusing on language while also opening up the writing classroom to other disciplines is at the core of her teaching practice.
Read Article
Hampshire in Havana Program Embraces Digital Humanities to Create a Dynamic Virtual Immersion Experience
To center critical, historical, and decolonizing points of view, the program produced a series of video interviews with intellectuals, educators, activists, performers, filmmakers, and artists who live and work in Cuba.
Read Article
Stay In Touch
With The Communications Office
Snail Mail
Office of Communications
Hampshire College
893 West Street
Amherst, MA 01002
Phone + Email
413.559.6062
communications@hampshire.edu