A $400,000 grant from the Luce Initiative on Asian Studies and the Environment (LIASE) will provide new opportunities for Hampshire faculty and students to pursue environmental and agricultural research in China and Thailand.

A $400,000 grant from the Luce Initiative on Asian Studies and the Environment (LIASE) will provide new opportunities for Hampshire College faculty and students to build cultural connections and pursue environmental and agricultural research in China and Thailand.

This multi-year implementation grant builds on a $50,000 LIASE exploration grant awarded to Hampshire in 2011, and makes up the bulk of a total of $616,000 the College is allocating for the initiative over the next four years. It will fund opportunities that include faculty exchanges, course development, language learning, and student projects.

Grounded in Hampshire's dedication to experiential learning and sustainable practices, the program is intended to help in the development of sustainable communities that can eventually solve the environmental challenges of the 21st century. The College will work with existing partners like China's Anhui Agricultural University (AAU) as well as emerging organizations like the Little Donkey Farm CSA outside of Beijing.

They will visit Little Donkey Farm to learn about their organic farming approaches and about the courses they teach on CSA management and organic farming. They will also visit several other CSAs and organic farms near Hefei and Shanghai and bring back two AAU students to take part in Hampshire's Food, Farm, and Sustainability Institute from June 3 to July 11.

"It's exciting to have a grant that allows us to pull this exchange together," said Professor Johnson. "The goal is to build ties and make them ongoing so they live beyond the grant, creating networks in China for Hampshire students and faculty related to farming and the environment. I hope that we will have more student work coming out of these connections."

Professor Schultz noted that, with China's large population, there is a possibility to implement the more labor intensive organic practices needed to shift from current non-sustainable methods initially developed in the US while still meeting the enormous food demands of the country. This grant, he feels, can be used to disseminate that information and in turn gain valuable knowledge about the successes and failures of China's agricultural system.

The impact of pollution on an important part of that agricultural system is being studied by Professor of Chemistry Dula Amarasiriwardena. In collaboration with the Chinese Research Academy of Environmental Sciences, he and his students used the LIASE exploratory grant to begin studying the environmental impact of the Xikuangshan (XKS) antimony mine in China's Hunan Province. Much of the waste from the plant is disposed of in the water supply that feeds the agricultural land downstream. The new funding allows Amarasiriwardena to return for additional field work to explore the effects of that contamination.

"We want to look at how these metals are getting into food systems, particularly in rice," said Amarasiriwardena, whose former student Priyanka Basnet 09F, now an associate researcher at Mount Sinai Medical School, was able to determine that antimony was ending up in the husk and bran of rice. "Once it's absorbed into the plant, it's translocated and there can be bioaccumulation in the edible parts of the seed crops in the XKS area. Our field work will lead to a number of Division II and III projects."

A fourth project, led by Associate Professor of Cultural Psychology Kimberly Chang, focuses on U.S.-China foodways and local-global food relations among consumers, growers, and producers on both sides of the Pacific. Based on exploratory research in China in summer 2012, Professor Chang offered a new course this spring entitled Critical Ethnography: Following the Chinese Food. Each student received a small grant to carry out a semester-long multi-sited ethnographic research project, while learning the methodological tools for studying food as a system that connects individuals and communities from Western Massachusetts, to Boston and New York City, to China.

Student projects in ranged from studies of Chinese restaurants as spaces where ideas about "authenticity," "health," and "home" were constructed by both consumers and restaurant owners; Hampshire student beliefs and practices regarding the use of Chinese herbs to treat physical and mental health; and the relationship between cultural diversity and biodiversity of Chinese vegetables grown in New England. The class also took a fieldtrip to Boston Chinatown, where they did fieldwork and met with Val Wong of Planet Takeout, a participatory documentary project about Chinese take-outs as sites of community storytelling and cultural crossroads in Boston and beyond. Inspired by this multimedia work, students mapped their own projects on Google Maps using a combination of text, image, and sound. Professor Chang will teach the course again next spring, with the goal of taking students on the road to China in the summer 2015.

Funded by the Henry Luce Foundation's Asia Program, LIASE aspires to encourage innovative approaches to Asian studies teaching and research at the undergraduate level through the lens of the environment and sustainable development. 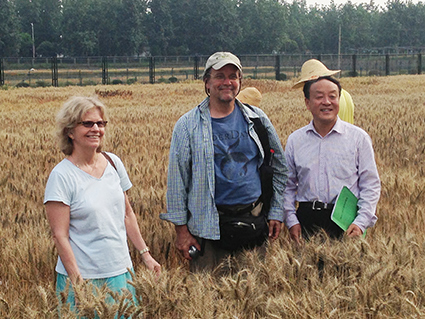