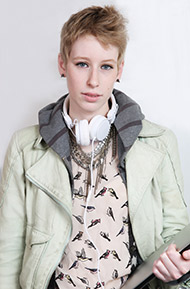 During the summer before Div III, Opitz undertook a similar study with speech at the University of Vienna. Opitz worked with a team of the University researchers who had a group of participants listen to recordings of emotionally neutral words delivered to convey the above four emotions. The study resulted in a paper that examined which properties of speech produced an understood emotional response, and related the findings to previous work on emotion in music.

When she returned home for her final year at Hampshire, Opitz felt dissatisfied with the depth at which the study looked at music and wanted to take what she had learned over the summer and apply it in her Division III.

Opitz and Five College student Chris Howell, a senior at UMass, programmed a set of sounds similar to those in the Vienna study, but instead of words they applied the properties to melodies they had programmed for the four emotional traits.

Participants generally rated the sounds as they were intended to be, with the exception of sounds Opitz had formulated to sound relaxed. "There is very little evolutionary need to communicate that you're fine," Opitz says, explaining that sounds like cautionary calls are more important to the survival of a species than a sound indicating relaxation.

Optiz intends to pursue an advanced science degree in the future, but for now hopes to work in a student life office professionally.