Professor Susan Darlington's "The Ordination of a Tree"

The Ordination of a Tree: The Thai Buddhist Environmental Movement, by Professor Darlington, examines a Buddhist monastic movement that reverses environmental degradation and unsustainable economic development

The Ordination of a Tree: The Thai Buddhist Environmental Movement, a new book by Professor Sue Darlington, examines a Buddhist monastic movement in Thailand that aims to reverse environmental degradation and unsustainable economic development through ordination of a tree. 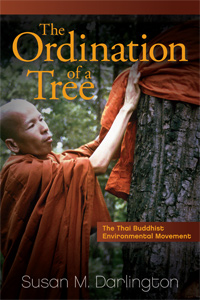 Published by SUNY Press, the hardcover edition was released in early December, with the paperback version following in February 2013. The book examines the evolution of a Buddhist monastic movement in Thailand that has drawn attention to the country's unsustainable economic development and consumerism, and the environmental degradation it causes.

At the center of their movement is a tree ordination ritual, in which monks wrap orange clerical robes around trees. These "ordained" trees then served as symbolic protectors of the Thai forests that were rapidly being destroyed by private and governmental interests.

Professor Darlington first became involved with the monks in the 1980s, and initially had planned to publish the book about their movement and the tree ordination ceremony in the early 1990s. By continuing her research, though, she believes it is a much stronger chronicle of their efforts.

"Had I published this in the 90s, it would have been about strong radical activism peripheral to mainstream society," said Darlington. "But over two and a half decades, I was able to see it become embedded in Thai popular culture. I've talked to monks about how they've changed and adapted, and was able to bring more of a critical perspective to the use of the ritual as well as the monks' roles."

Darlington shows how the monks interpret their lived religion as the basis of their actions, and provides an in-depth portrait of activist monk Phrakhru Pitak Nanthakhun. She also details the obstacles monks face, including damage to their reputations, arrest, and even assassination, and describes how, despite this, monks have gone from individual action to a loosely allied movement that now works with nongovernmental organizations.

The Ordination of a Tree will be incorporated into Darlington's spring 2013 course Buddhist Economics, which she will co-teach with economics professor Helen Scharber. Many of Darlington's courses have been influenced by her research in Thailand, and she is excited to work with Scharber to present a deeper background of the economic developments that spurred the monks to action.