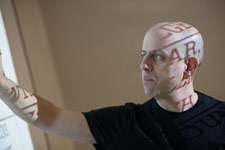 Hampshire College's Professor Emeritus of Biology Raymond Coppinger and Professor of Computer Science Lee Spector (pictured right) collaborated with mathematicians Ramon Escobedo Martinez and Cristina Muro of AEPA-Euskadi in Bilbao, Spain, for the research explained in the paper "Group size, individual role differentiation and effectiveness of cooperation in a homogenous group of hunters."

The group had worked together previously in developing a mathematical and computational model to simulate behavior patterns that wolf packs exhibit while hunting prey. This latest paper built on that work, and explored how a varying number of wolves can affect a pack's efficiency in hunting.

Professor Coppinger noted that the model, which simulated the movement of the wolf pack and did not focus on the behavior of the prey, followed a simple pattern: "There were two rules. One, chase deer. Two, stay fifteen feet away from every other wolf."

Those two stipulations in combination, it turned out, created complex patterns that effectively simulated observed hunting behaviors of wolves in the wild. Termed "emergent behavior," the patterns can also be seen in actions including fish forming schools and geese flying in V formations.

"If you watch a wolf hunt, they do some pretty cool stuff," said Professor Spector. "It looks like they ambush, surround the prey, have specialized roles with a leader and a pack hierarchy. It looks like they have a lot going on. But you can get that behavior with a really simple model that doesn't have any of that going on. We are not saying that real wolves do not have social structure or intelligence, but this research shows you can get the observed behavior without any intelligence or communication."

In the latest study, the computational models reveal that a pack size limited to four or five wolves is the most effective for surrounding prey.

"If a pack is too big, all hell breaks loose," said Spector. "The dynamics are chaotic, in the mathematical sense of chaos theory, and if you go above a certain number of wolves the prey can escape. That could explain why you don't see wolf packs above a fairly small number. When looking at animal behavior, you want to explain why it is the way it is. Computational and mathematical models provide new ways to explore candidate explanations."

Coppinger adds that this type of research can help remove the anthropomorphism that sometimes clouds scientific judgment when dealing with animals like wolves.

"Because of models like this, biologists understand they have to make observations in a little different way," he said. "For years and years, wolves have been this magical animal, highly intelligent with complex packing behavior and a hierarchy. Those stories are mythological. These models show that their behavior is no different than geese forming a V pattern in flight."