During the first few months of the year, the older children in the infant room would often stop in front of the studio door on their way to the playroom to peer inside. With each daily walk from the classroom to the playroom, the children began to show an increasingly strong interest in exploring the materials inside. During their first few studio experiences, it became evident that they already had plans for how they would interact with the materials they had seen. Now the children often request the studio, and the teachers and Hampshire students are learning more about them as individual and as group learners from the documentation they have collected during these studio experiences. 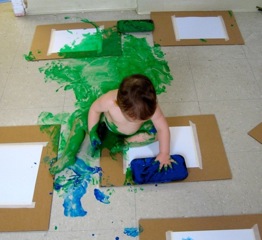 Adam immediately gets into paint-spreading and mixing the colors over the floor, the paper, and himself. Maria stands and watches until she accidentally steps on some blue paint. She picks up a paintbrush and begins to explore with it. Adam continues to delight in the mess, repeating the words "wow" and "cool." He begins exploring with a third color. Maria continues to watch him and hold her paintbrush. She laughs at Adam, who now has three colors on his face.

Maria, Henry, and Kaia all raced to the studio when the door opened. Maria grabbed Kim's hand and pulled her to sit down saying, "Sit. Play." Henry went straight for the caps, picking two and placing them carefully on a chair, then moved on to the shredded paper. 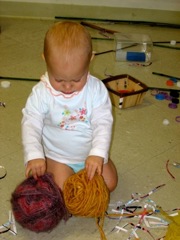 Kaia discovered the yarn and at first gently pet it with her hand. Then she began to slowly squeeze it with both of her hands. A bit of fluff stuck to her fingers and she examined it carefully. Kaia then began to unroll the balls of yarn, exploring the length with a pincer grasp. The yarn continued to hold Kaia's attention for the next ten minutes.