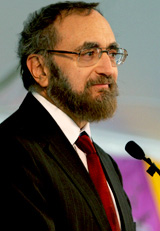 It can't beam you to distant planets, but a theory posed by physics professor Herbert Bernstein deemed SuperDense quantum teleportation has proven interesting to NASA and others pushing the boundaries of the field of quantum physics.

"It sounds very jazzy, but quantum teleportation is actually about making connections for information," said Professor Bernstein. "What it does is send the complete quantum state from a single particle that comes in with that state to a different particle that has never interacted with it."

The quantum state, Bernstein noted, is "essentially the complete basic information about micro-reality," and teleportation of the quantum state has been achieved by scientists numerous times. Bernstein's proposal worked out a way to send twice as much information as can currently be sent, using the same number of bits and bytes.

The viability of that theory is now being tested by a team of experimental quantum mechanics investigators led by physics professor Paul Kwiat at the University of Illinois at Urbana-Champaign through a 2010 grant from NASA Innovative Advanced Concepts (NIAC).

"Paul got the grant, and I received a sub-grant to be the theoretical physicist," said Bernstein, who has been collaborating with Kwiat since the latter assisted with Bernstein's research in the 1980s while a post-doctoral researcher. "NIAC wants to do things that relate to missions in space and have potential breakthrough possibilities."

Bernstein said that quantum information technology will likely be used by NASA in the future for things like sending information back from deep space. It can also be applied to secure communications and in computing problems that currently can't be tackled effectively. He looks forward to the final results of the current tests, which should be written up in the first quarter of 2013.

"We won't know until the testing is finished what the next step will be," said Bernstein. "The next thing we're proposing is to do SuperDense quantum teleportation on the International Space Station."

The professor added that it's exciting when his students delve deeply into theories like these, especially at a school like Hampshire College.

"One or two students a year work with me, and get hooked on this stuff one way or another," he said. "My Hampshire connections let me see a kind of interdisciplinary mixture of social commentary and critical theory within the foundations of theoretical physics. It's not something you see in many places, that overtone of trying to make the world better with everything we do."