Did you know that tap water at Hampshire College, which comes from the Amherst municipal water supply, is held to stricter standards than bottled water?

Wednesday, April 3, 2013
Did you know that tap water at Hampshire College, which comes from the Amherst municipal water supply, is held to stricter standards than bottled water? 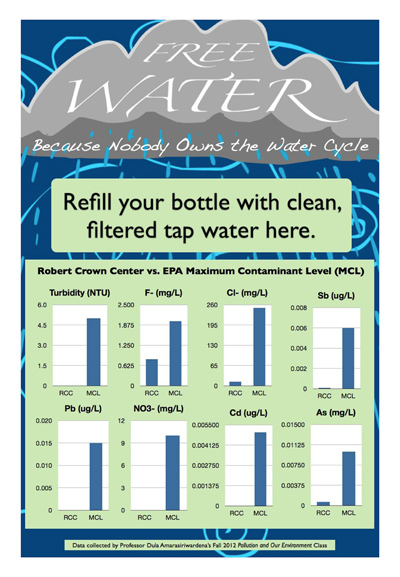 Sales of bottled water ceased on campus in fall 2012, following a movement by students to educate the campus community about its environmental and economic costs.

"We want people to have water, but we also want them to know that tap water is not only cheaper, it's regulated by the EPA," said Sustainability Initiative Director Beth Hooker.

Signs reporting detailed test results have been posted at all the hydration stations.

In spring 2012, environmental action group New Leaf launched the effort to ban the sale of bottled water on campus. The students, working with Associate Dean of Students for Campus Leadership and Activities Pam Tinto, wrote a proposal to purchase the hydration stations. They were awarded an $11,000 grant for that purpose by the Committee on Community Development (COCD), a subcommittee of student government.

Tinto, who primarily worked with New Leaf student leader Emily Keppler, noted that there are plans to install more stations this summer using that funding, and that they will seek additional funds to install even more after that money has been used.

"It's an ongoing project. We'll install them as we can budget them," said Tinto. "Students seem to love them. It's changing people's perspectives on tap water, and encouraging them to drink it instead of seeing bottled water as the healthiest option. And the fewer plastic water bottles we have, the more we reduce our carbon footprint."