The grant was given in honor of Gregory S. Prince, Jr., a past president of Hampshire College, who was instrumental in developing the program, envisioning the James Baldwin Scholars as a means for Hampshire to address gross societal imbalances in educational achievement. 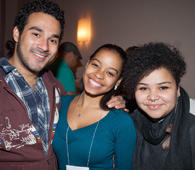 This year marks the 20th anniversary of the Baldwin program. The program provides scholarships and educational support to students from underserved communities who show academic promise and leadership ability. It offers a transition year of co-curricular guidance, support, and a slightly modified course-load, with all expenses paid, while Baldwin Scholars become immersed in campus life at Hampshire.

More than five out of six Scholars successfully complete the Baldwin year and are invited to continue their education at Hampshire College.

"This gift will make an enormous difference in the lives of young people of great talent," said Baldwin Scholars program director Madelaine Marquez, who added that more than 60 students have applied for admission to the program in 2013. "This past year has been a terrific example of the incredible students who want to come to Hampshire and fulfill their promise."

As part of the 20th anniversary celebration, the James Baldwin Scholars Program Campaign aims to double the program's endowment to $3 million by the end of 2014. The fundraising total so far is up to $2.3 million. Marquez noted that this funding directly affects how many students can be admitted as Baldwin Scholars each year, and that the endowment's growth ensures that fewer deserving students have to be turned away.

"I hope this gift from the William R. Kenan, Jr. Charitable Trust inspires other organizations and individuals to contribute in a similar way to the program," said Marquez.

For more information on how to support the Baldwin Scholars Program Campaign, please contact Jeffrey Wolfman at jwolfman@hampshire.edu or 413.559.5638.