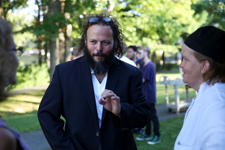 This event is tonight, Tuesday, Sept. 24, from 5-7 p.m. in the RCC. All in the Hampshire campus community are invited.

Each fall for the past few years, students involved in the Local Foods Initiative at Hampshire have helped organize a fall feast that brings the campus community together in the Robert Crown Center. This year, they have combined efforts with Hampshire's Healthy Food Transition and with Bon Appétit's national Eat Local Challenge. Music will be provided by Hampshire alums, the Ephemeral Stringband.

"We're excited about merging these events and working on the details. It's yet another perfect way to illustrate the integration of Bon Appétit into the Hampshire community," said Howard Wein 93F. A graduate of the College who is assisting Hampshire in its Healthy Food Transition, Wein owns the hospitality and venture firm Howard Wein Hospitality.

In the Eat Local Challenge, Bon Appétit clients nationwide are preparing regionally authentic meals made entirely from ingredients harvested within 150 miles of each kitchen. The Eat Local Challenge began nine years ago as an outgrowth of Bon Appétit's Farm to Fork program, a companywide commitment to buying locally. Bon Appétit chefs are required to purchase at least 20 percent of their ingredients from small, owner-operated farms and ranches within 150 miles. By buying directly from local farms, Bon Appétit plays a vital role in the local food movement. Through the tens of millions of dollars it spends annually through the Farm to Fork program, the company has helped small producers not only stay in business, but flourish.

As part of this year's Eat Local Challenge, Bon Appétit at Hampshire College will share tips on how to "go local." This will include sharing a list of five locally produced foods, like fruit and eggs, that are easy to find, as well as locally available substitutions for items that might be difficult, such as olive oil and sugar.

The event also provides an opportunity for any interested Hampshire student to participate in a national photography contest:

Bon Appétit is sponsoring a local food photography contest via social media. Guests are encouraged to take a photo of their 100 percent local Bon Appétit meals on Eat Local Challenge Day, then Tweet or Instagram them with their location and the hashtag #eatlocalchallenge. The most artful effort nationwide will win a $200 gift certificate to a farm-to-table restaurant in their area and signed copies of new books from two food-movement heroes—Michael Pollan's Cooked and Marion Nestle's Eat Drink Vote: An Illustrated Guide to Food Politics.