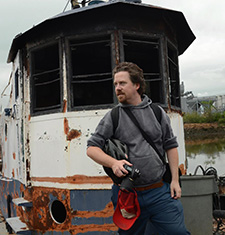 Abandoned and ruined areas have always fascinated photographer and documentary filmmaker Nathan Kensinger 97F. Currently based in Brooklyn, Kensinger has been exploring the fringes of New York City since 2000. He has explored desolate neighborhoods, abandoned airports, hospitals, schools, factories, boat graveyards, and landfills.

In his work, Kensinger exposes forgotten spaces and off-limit landscapes, and uncovers the beauty and untold stories within them. Many of the places Kensinger photographs are slated for destruction, so this may be a last chance to share their history. "It's about taking the viewer into a landscape they wouldn't normally have access to," he says. He writes photo essays about his experiences in a bi-monthly column called "Camera Obscura" for the website Curbed, and is also working on an ongoing series of photo essays called "The Abandoned & Industrial Edges of New York City."

In addition to his photography projects, Kensinger has also made several documentary films. From 2001-2005, he worked on a film called Liberal Arts, which followed a group of six Hampshire students from their first year of college to the end of their fourth year. His other films include Bolerium (2006), Last Day At The Nut House (2009), and English Kills Voyage (2013). He is currently working on another film titled You Can't Take It With You.

Kensinger has done numerous installations, often tying together his interests of film, photography, and writing. His project "The Forgotten City" (2011) was projected onto the side of the Greenpoint Terminal Market, and was a ten-minute video loop of photos exposing fires, riots, and explosions in the Market's empty warehouses. He has also done gallery installations, such as "This Building Has a Story" (2010), which included photographs, drawings, and writing from his exploration of an abandoned building in Williamsburg, Brooklyn.

While at Hampshire College, Kensinger studied documentary filmmaking. His Division III (senior) project, Sold: San Francisco's Newspaper Monopoly, was a documentary about the death of a San Francisco newspaper.

Kensinger has had several exhibits during the past year, including six photo exhibits and video installations shown in New York. His most recent photography project is about the aftermath of Hurricane Sandy in New York City, and selections from this work are currently being exhibited at the Museum of the City of New York and the Brooklyn Historical Society. He is also a film festival programmer, and will soon be selecting films for the 17th annual Brooklyn Film Festival. His work has been featured in the New York Times, The New Yorker, Wired Magazine, New York Magazine, and the Wall Street Journal. His films have been screened at festivals including Slamdance, Black Maria, Rooftop Films, and the SF IndieFest.