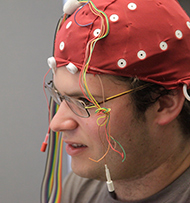 "I came to Hampshire because I liked the idea of creating my own program of study," says Nathan Whitmore. "I knew I probably wanted to do neuroscience and computer science, but I discovered I was a lot more interested in brains than in computers."

Whitmore first realized this during his second semester. The impetus was a course with cognitive science professor Joanna Morris called Brain and Cognition. Now in his fourth year, he can still recall the impact of Morris's teaching style.

"I had read about the brain before, but she was having us read advanced material. In class we had discussions in which we were able to explore these subjects. It wasn't just reading from a textbook," says Whitmore.

Before his class with Morris, Whitmore's focus was split between artificial intelligence and psychology. After that course, neuroscience took the clear lead. That said, his computer science studies have had a great influence on how he approaches his work. "I like thinking about the brain as a computer," he says. A class with Morris using Hampshire's ERP (Event-Related Potentials) laboratory, which enables researchers to examine brain activity, provided Whitmore with essential training for his research.

"This is a pretty common technique in neuroscience," he says."We picked a research question and designed a study for class. It's really useful. I got a chance to see what goes into designing this kind of study and interpret literature in the field."

Taking psychology professor Neil Stillings's Mind, Brain, and Behavior seminar was equally important. Each student chose a research project, and the work was subject to peer reviews and in-class discussions of its merits.

"I did something on the neurobiology of autism-spectrum disorders," says Whitmore. "I think this was good preparation. I plan to go to graduate school in neuroscience, and this seminar gave me a leg up for that."

For his Division II, the second of the three stages of a Hampshire education and the one in which students begin to determine their academic focus, Whitmore worked with computer science professor Lee Spector. The project was called "Things That Think," and it was an attempt to balance his interests in neuroscience and artificial intelligence.

Although one of his conclusions, he says, was that "it's difficult to integrate neuroscience and computer science to the degree I thought I could," the project led to his research into technology called transcranial direct current stimulation (tDCS), which provides therapeutic brain stimulation using electrical current. Working with electrical engineering students to overcome some of the design obstacles, he says, "I realized I could make one of these more affordably than what they usually sell for." He actually developed a way for people to make a safe tDCS brain stimulator for about $50.

"In the future, I'll probably do research. I want to get a PhD in either cognitive or computational neuroscience," says Whitmore. He credits Hampshire with providing him with the opportunities necessary to prepare for this career. "I've really appreciated the intellectual freedom and support I've gotten at Hampshire," he says.