"For me, poetry is all about rich layers of complexity and contradiction," Division III student Milo Muise says. 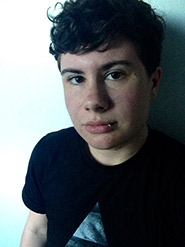 "For me, poetry is all about rich layers of complexity and contradiction," Division III student Milo Muise says. "Poetry is able to approach an idea without caging it, without reducing it to something small and comprehensible. Sometimes poems make me philosophically dizzy, echo around in me for days after reading."

To Muise, poetry isn't about finding a straightforward meaning or message in the writing, but about finding how the poem resonates in their body. Poetry's engagement with experimentation, contradiction, and multiplicity makes it "a profound mirror of what it means, to me, to be alive," they say.

For Div III, Muise has created a two-part project, consisting of a poetry manuscript and a creative essay.

The poetry collection, titled LOST BOYS: poems, is from the perspective of a character whose body is infested with termites. "The termites help me, as a writer, speak to ideas of embodiment, sickness, gender, agency, invasion, and metamorphosis," Muise says. They also hope that readers can bring their own meaning to the text, based on their own experiences and associations.

Muise's essay—Magic, Exile & Defiant Miracles (an essay of bodies)—investigates the idea of the body existing and not existing at the same time. "This ambiguous existence infuses these bodies with a new kind of possibility and magic, and, inherently, monstrousness." They explore the idea of impossible and magical bodies—including their own body—through a discussion that integrates philosophy, poetry, science, and magic.

Muise says Girmay has helped them to believe in the importance of poetry and its impact on people's lives. Madden's class, Long Poem & Lyric Essay, helped set Muise's Div III into motion; they wrote ten poems for the class which ultimately ended up in the Div III collection. Muise also gives credit to Rogers' class, Meeting Lacan, which helped them to explore the connections between poetry and psychoanalysis.

"Milo has produced a stunning poetry collection and a powerful essay," says Professor Rogers. "Both works mesmerize the reader with a series of acute, repeating impressions, disturbing our categories of gender and the body. This is truly an outstanding Division III project by a brave, original, and wonderfully articulate student."

They hope to attend grad school in a few years, but for now they are hoping to pursue counseling, while still leaving time to work on their writing.