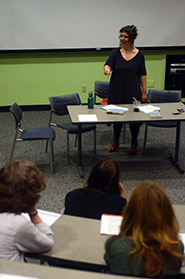 "The Hampshire people are willing to fight. They're not going to stop."

In asserting the need for the humanities in a digitized society, Elizabeth Brundage 78F voiced one of the most repeated rallying cries of Div IV 2014: Transforming Ideas, Pursuing the Humanities. Alums of Hampshire College, which was created to challenge and enliven the traditional liberal arts education, were eager to discuss the state of the humanities in the 21st century, and to ensure that the humanistic approach thrived in the decades to come.

Hampshire humanities faculty, including Dean of the School of Humanities, Arts and Cultural Studies Jeff Wallen, organized and moderated events throughout the weekend.

"Humanities is the key, the Rosetta Stone, to everything," said documentary filmmaker Ken Burns 71F during a lunchtime discussion with President Jonathan Lash on Saturday. Their talk traversed the cultural impact of the Roosevelts (the subject of Burns' latest film), the importance of lifelong learning and the centrality of that to Jefferson's ideal of "the pursuit of happiness," Hampshire's summer Creative Media Institute, and the need for people involved in the humanities and the liberal educational model to come to its defense.

"The word liberal is pejorative now in the United States, when the United States is in fact a liberal experiment," said Burns, whose short film The Heart of the Matter, shown during Div IV weekend, focused on the importance of the humanities and social sciences to the nation.

From curators to poets, artists to scientists, the discussions, roundtables, presentations, film screenings, and other Div IV offerings presented a strong overview of the many ways Hampshire alums have affected the contemporary dialogue on the humanities.

A lively debate came between New School Assistant Professor of Digital Humanities Julie Beth Napolin 96F and Google systems engineer Andrew H. King 00F during the Humanities in the Digital Age session, which was moderated by Lise Shapiro Sanders 90F, associate professor of English literature and cultural studies. Napolin argued that in an age where there is a constant push to big data, efficiency, and the "systematization of everything," the humanities offer a less rigid, yet powerful alternative.

"As humanists, what we have to offer the current system is inefficiency and ambiguity," she said, noting that those two approaches helped to prevent people from being viewed as simply "networks of data" rather than individuals.

King disagreed with the outlook that digitization was inherently dangerous, and suggested that in many ways it promoted the ideals the humanities stood for.

"Google's data centers are in a very real way the reemergence of the library," said King. He argued that digital compilation and dissemination of knowledge is essential to strengthening the importance of the humanities. "The fact that kids in very underprivileged nations can carry a library in their pocket on their phone is fabulously disruptive."

Being disruptive of preconceived societal values in order to reinforce deeper truths and needs is what many of the artists, writers, and academics on the Div IV panels strive to do in their work. Experimental approaches to lectures and curating put into action by Gordon Hall 02F, poet and Purdue University professor Donald Platt 81F's desire to protect the humanities despite the focus on more "utilitarian" fields like business administration and engineering, and Nat Herold 74F's running of the last bookstore in Amherst all speak to the different ways alums are doing this.

A panel moderated by Professor of Literature Brown Kennedy celebrated the history of humanities at the College, and the impact of founding faculty David Smith and Dick Lyon. Another event, marking the restoration and reinstallation of artist Stephen Antonakos' neon sculpture Incomplete Circles and Squares, Red Neon above the Robert Crown Center pool, detailed how Hampshire's commission, part of a public art program initiated by Olivia Georgia 74F, was the first of more than 50 public projects Antonakos would undertake.

"Incomplete Circles and Squares, Red Neon helped define one of the most important dynamics in Stephen's work - the activation of space. His distinctive vocabulary arose from a unique ability to transform the surroundings, to make them magical," said Georgia.

Providing people with the ability to transform their surroundings is arguably something the study of the humanities does best. And in doing so, participant and scientist John Stutz noted, it makes a civilized, sustainable world possible.

"Can you think of a society worth living in that doesn't destroy every living thing on the planet? Where do you look for that? I would suggest to you the humanities," said Stutz. 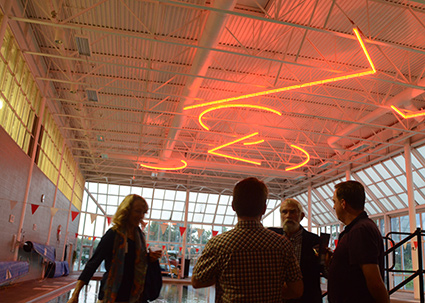