Hampshire College at 45: The Making of an Anniversary

“Each year at Hampshire was so different, a year-long adventure. You never knew what to expect,” says Suyeon Min 11F. “This weekend reminded me of that.”

When Lani Blechman 04F asked the crowd at the panel "Making Waves: Social Justice at 45" to shout out the names of alums who were bringing change to the world, she did something very Hampshire.

"We're here," said Hampshire College President Jonathan Lash in his opening remarks, "to honor a remarkable past, celebrate the present, and set our sights on the future." His predecessors Charles Longsworth, Adele Simmons, and Gregory Prince joined him in that effort, along with more than 650 other members of the College community who came from as far as Australia to experience the milestone.

The diverse nature of that community was on display, proof that, 50 years after the publication of The Making of a College in 1965 and 45 after the first class arrived in 1970, the College was living up to its ideals of individualized, student-focused, experiential (and experimenting) education.

"Each year at Hampshire was so different," said Suyeon Min 11F. "It would be a year-long adventure. You'd have to figure out your new friends, new concentrations. You never knew what to expect. This weekend reminded me of that."

President Longsworth, who co-authored The Making of a College with Hampshire's first president, Franklin Patterson, reflected on the many other institutions that had opened around the same time Hampshire did and which either no longer exist or have been radically reshaped. Noting that "colleges are not easy to found, they're not easy to fund, and the remains are easy to find," he said the fact that Hampshire had not only survived but thrived was "a dream come true." That was a common theme during the weekend.

"No matter what your concentration or Division III, if you can learn creative problem solving you're going to go far in the world. Hampshire taught me that," said Shelley Johnson Carey 72F during the Hampshire of Color Lunch.

The mid-day event, held in the Lebrón-Wiggins-Pran Cultural Center, drew dozens of Hampshire alums who still consider the center a home away from home and a place where classmates eventually became family. So many reconnections of that sort took place across campus.

Tashal Brown 03F said her time at Hampshire felt like the start of  "a resurgence of what Hampshire is all about," and several offerings over the weekend supported that outlook. Tours of the R.W. Kern Center, named in honor of donor Bill Kern 75F's father, showcased Hampshire's newest building, which is designed to meet the exacting standards of the International Living Future Institute's Living Building Challenge and serves as a physical statement of Hampshire's dedication to sustainable practices. Alums were also introduced to the College's new Ethics and the Common Good Program through a panel moderated by the program's recently-hired director Javiera Benavente.

Much of Hampshire's success, as President Longsworth noted, comes down to the individuals who had taught, studied, worked, and otherwise supported the school over the years. At tributes to recently departed community members Professor Emeritus of English and American Studies David Smith, Director of Martial Arts Marion Taylor, and dining commons employee Roberta Tudryn, a reception for retiring Professor of Biology Lynn Miller, and the dedication of "Studio G" in honor of New Media Production Technician John Gunther 84F P02, the personal insight shed light on the way they and thousands of others have shaped the overarching Hampshire story.

"It's been 45 years since Hampshire's first class arrived at an unfinished campus at an unaccredited school to be part of an unpredictable experiment in education," said President Lash. "Everyone involved  was taking a huge leap of faith. It is our good fortune that you did." 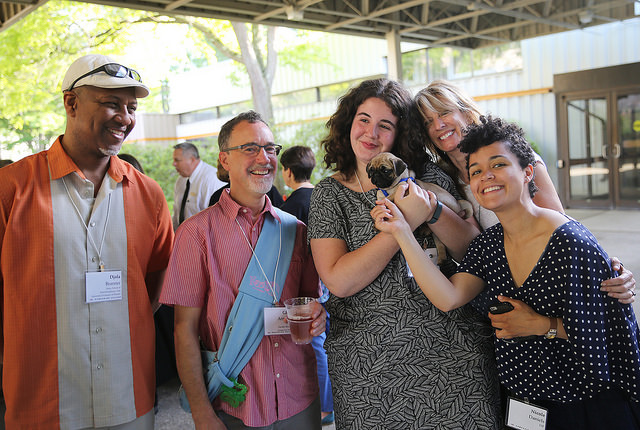