More than 1,000 students, activists, and community members are expected at the Civil Liberties and Public Policy (CLPP) Program’s 35th-anniversary conference

Right now, the Supreme Court is deliberating Whole Women’s Health v. Hellerstedt, one of the most historic cases on the subject of abortion since Roe v. Wade. The past five years saw a sharp increase in anti-abortion legislation: two hundred eighty-eight restrictions have passed and more are considered daily. It’s clear that access to abortion is on the line. What will it take to make reproductive justice a reality?

More than 1,000 students, activists, and community members will work to answer that question at the Civil Liberties and Public Policy (CLPP) Program’s 35th-anniversary conference, “From Abortion Rights to Social Justice: Building the Movement for Reproductive Freedom.” At this year’s conference, which takes place April 8–10 at Hampshire College, attendees will gain the skills and the community necessary to organize in a political climate especially hostile to reproductive rights. Simultaneously, there are other threats to reproductive freedom, such as coercive sterilization and poor access to safe birth control, as well as family separation via prisons, deportations, and family court.

“Leadership protecting everyone’s right to bodily autonomy is needed now more than ever—and CLPP helps develop it,” says Lucy Trainor, assistant director. “We cover a huge range of topics. Part of what makes the conference vital to activism across the country is that we highlight the connections between reproductive justice and other social-justice movements.”

This year’s event features over 80 workshops and more than 160 speakers. The following is just a small sample of the workshops.

Rachael Strickler, a cochair of CLPP’s student group, says the diversity of attendees “exemplifies one of the key aspects of this movement: bringing people together across what sometimes seem like impenetrable boundaries to fight for justice.”

IonaPearl Reid-Eaton, the student group’s other cochair, notes the extensive opportunities available to young people at the conference. “CLPP is a chance for younger, newer activists to immerse themselves in the social-justice world and see that they have a future in it.”

A unique organization that combines activism and academics, CLPP builds leaders in reproductive-justice work as its mission. During its 35-year history, CLPP has trained more than 15,000 young activists. Seventy-four percent of CLPP participants remain lifelong advocates in reproductive-rights and allied social-justice movements, often at the state, national, and international levels.

CLPP strives to make the conference accessible. Simultaneous Spanish interpretation is offered during some workshops. Event spaces are wheelchair accessible, and the conference is a scent-safer event. Childcare will be provided free of charge.

The three-day conference begins Friday, April 8, in Franklin Patterson Hall. Friday workshops will run from 4 to 6 p.m. Breaking Silences: An Abortion Speak Out will take place on Friday, at 7:30 p.m., in the Robert Crown Center. Workshops and plenaries continue on Saturday, April 9, from 9 a.m. to 6:45 p.m. and on Sunday, April 10, from 9 a.m. to noon.

Students, staff, and participants are happy to give interviews. For any more information, please contact clpp@hampshire.edu. 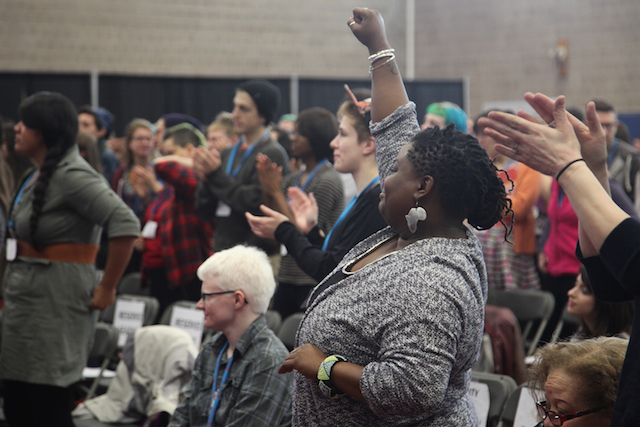