Only one undergraduate team entered the student design challenge at the American Ecological Engineering Society Annual Meeting in June. When they came away with first prize – defeating seven other teams of graduate students by designing the most effective storm-water filter – those six Hampshire College students had an even stronger appreciation for what they’d learned in the past year. Making their achievement even more significant: Five of the Hampshire undergrads had just completed their first year of college, and the sixth had completed his second.

Aldyn Markle, Claire Shillington, Karen Panke, Abbi Wilson, Joe McGlynn, and Matt Raymond had been part of the Integrated Sciences tutorials course that used the College’s new 17,000-square-foot living building – the R.W. Kern Center – to teach first-year students the foundations of modern science. The Kern Center was constructed using the most advanced green-building standard to supply its own electricity and water and treat its own wastewater. The centerpiece of the first semester of the course was the study of wetlands to treat gray water. During the second semester, the students led their own independent research of the Kern Center’s advanced systems. This class introduced the concepts the team used to earn the challenge's top prize.

“For the competition, we were given different materials we could choose from to build the filter in four-foot-tall, six-inch-diameter clear PVC tubes, and then we had two days at the conference to complete the challenge,” said Markle. “We put gravel at the bottom of the tube, then sand and a layer of biochar. We chose biochar to remove nitrogen. We took steel wool, dissolved it in vinegar, and mixed it with the sand for phosphates, and then the combination worked on the turbidity.”

They had learned (unlike some of the other teams) to avoid using soil in their filter because it would increase the turbidity. Beyond practical knowledge like that, they were successful because the students knew how to work as a team. One of the concepts stressed in the tutorials was the importance of collaboration among researchers and scientists whose expertise is in different fields, but who could also take the lead in a project when their skills were needed most. Shillington and Markle stepped up as co-leaders, the “experts” on the design challenge, because both had studied filtration as independent research. In their research, Shillington’s focus was on gray-water filtering using similar PVC piping and Markle studied water quality and filtration using drawer and compacted-sand filters.

“If you had told me a year ago I would be able to do this, I wouldn’t have believed you,” said Shillington. “But we knew exactly what we wanted to do. I didn't realize how comfortable we were getting at building filters.”

Professors Sarah Hews (mathematics) and Christina Cianfrani (hydrology)– who co-taught the tutorials with Professors Jason Tor (microbiology) and Seeta Sistla (ecosystem ecology) – brought the students to the conference, and they were thrilled to see the collaboration and innovative thinking that went into the challenge in an environment that could have been intimidating.

“They saw how science is done in the scientific community, and they saw that they already have a lot to offer with their research,” said Hews. “It was impressive because even though Claire and Aldyn had the expertise, everyone was engaged and planning around the table.”

Said Matt Raymond, the second-year student, who was a teaching assistant in the tutorials, “Before we went, we had a collaborative brainstorm session. There was a lot of motivation to do well at the conference.” His own research tests the energy consumption of the Kern Center's HVAC system, and, as will the other members of the team, he’ll continue his research in the coming school year.

At the American Ecological Engineering Society Conference (this year in Tennessee), together with Hews and Cianfrani, the six students presented two posters, titled “Connecting the Living and Built Environment through the Living Building Challenge: Evaluating the Effectiveness of Integrating Alternative Building Practices” and “Greywater Filtration in a Living Building: Assessing Water Quality and Microbial Community Composition in Wetland Mesocosms.”

The trip to the conference and the summer internships the six students participated in were funded as part of a three-year grant, awarded in 2015, from the Dr. Lucy Fund. The Integrated Sciences tutorials were a new approach to co-teaching a single topic from the angles of several disciplines, and the second year of the tutorials begins in the fall. Cianfrani says she and her fellow professors are looking forward to elaborating on what they learned last year.

“We took risks and pushed boundaries, and had to take ourselves outside of our comfort zones,” said Cianfrani. “And we wanted to do that, as a model for our students.” 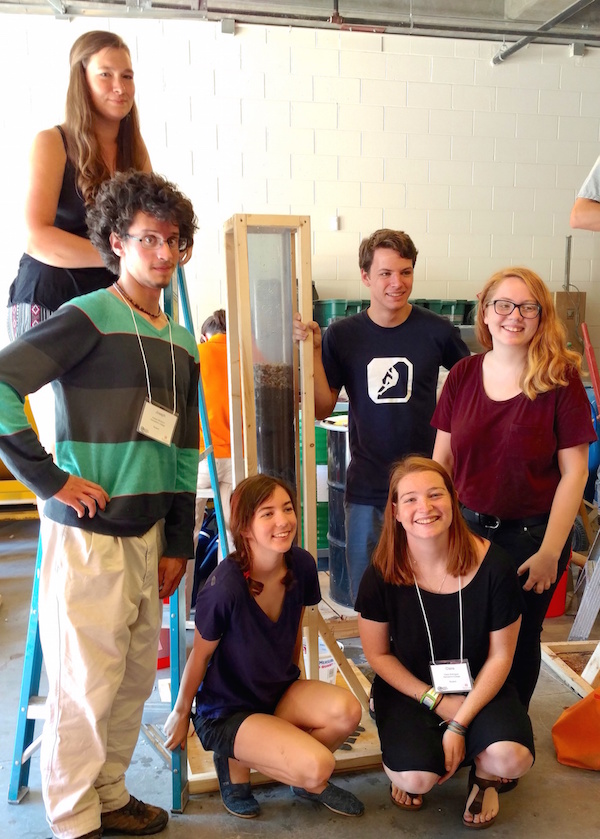