Hampshire alum and trustee Lucy McFadden, a physical scientist at NASA’s Goddard Space Flight Center, serves as co-investigator on the Dawn Mission to the asteroid 4 Vesta and the dwarf planet Ceres

On July 3, 2005, NASA’s Deep Impact spacecraft released a robotic impactor on a collision course with comet Tempel 1, 83 million miles from Earth. The impactor, about the size of a washing machine and sheathed in copper, would hit the comet at 23,000 miles per hour. Both the spacecraft and the impactor had cameras trained on the comet. We hoped that the crater and impact debris would contain spectral fingerprints, giving us clues to the nature of remote materials at the far edges of our solar system.

More than 100 satellite- and Earth-based telescopes were pointed at Tempel 1, including the Hubble, Spitzer, and Chandra. More than 10,000 people gathered to watch on a giant movie screen at Hawaii’s Waikiki Beach. It was one of the most widely watched projects in NASA history. I was in Room 358 at NASA’s Jet Propulsion Laboratory in Pasadena, California, with fifty or so people waiting to see the culmination of an experiment we had been working on for five years. We sat behind arced rows of computer consoles facing a 30-foot-tall projection wall at the front of the room.

We clapped when the impactor spacecraft separated from the flyby. We watched in awe as pictures popped up of scalloped ridges and mottled terrain no one had ever seen before. Then the images stopped. We got word that we'd lost signal from the impactor.

Nothing like this had ever been attempted. There was no guarantee the impactor would even hit its target. Project manager Rick Grammier told people it would be "like a bullet trying to hit a second bullet with the third bullet." For seven long minutes we waited.

All of a sudden, the projection wall lit up with a flash of blinding light — for an instant it felt like we all held our breath — and then I heard my colleagues scream and saw them jumping up and down and hugging each other. We saw the ejecta from the impact lit up by the sunlight. We were stunned by the light. Linear spokes radiated away from the impact site in long bright plumes, and reflected sunlight illuminated most of the comet surface. The images were spectacular. Grown men in here cried because they had been thinking of this moment for so long. I cried. It was an awesome moment. It was a beautiful sight.

Lucy McFadden, a physical scientist at NASA’s Goddard Space Flight Center in Greenbelt, Maryland, investigates the surface composition of the solar system’s moons, asteroids, comets, and meteorites. She currently serves as co-investigator on NASA’s Dawn Mission to the asteroid 4 Vesta and the dwarf planet Ceres. In the months following the Tempel 1 impact, analysis of long-wavelength emission spectra revealed a list of mineral and ice signatures that formed not just at cold temperatures very distant from the sun, but also at high temperature very early in our solar system’s history. The discovery proved that the development of our solar system “is far more complex than our earlier assumptions,” says McFadden. “It changed the paradigm.” 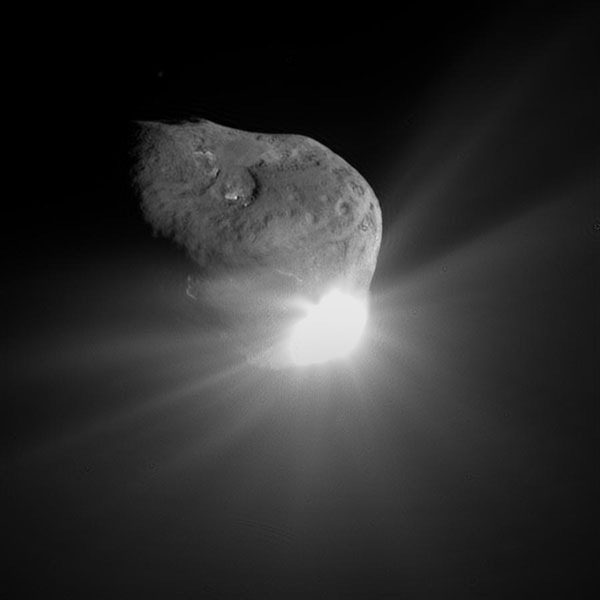