Hampshire College placed in the top 10 percent of several categories in this year’s national RecycleMania Tournament, a friendly competition and benchmarking tool for college and university recycling programs to promote waste reduction on campuses. RecycleMania is the nation’s premier recycling contest in higher education, managed by Keep America Beautiful. Over an eight-week period each spring, colleges across the United States and Canada report the amount of recycling and trash collected each week and are ranked in various categories.

Hampshire ranked in the top 10 percent, 14th out of 190 colleges, for diversion rate, i.e. recycle and compost divided by total waste generated. The College diverted 65.5% of waste toward recycling and compost as opposed to landfill.

Hampshire ranked in the top 2 percent, fifth out of 245 schools, with a weight of 49.078 pounds of recycling per capita.

For organic composting, the College ranked in the top 5 percent, seventh out of 134 colleges, with 24.9 pounds per capita of organics composting.

Hampshire's participation was led by students including the student group New Leaf, with assistance from Tom Walsh in the Facilities and Grounds Office.

According to Hampshire student Sara Brown of New Leaf, compared to the 2016 results, Hampshire's diversion rate increased by 4.2 percent, its cumulative per capita recycling increased by 6.1 pounds, and its per-capita composting increased by 5.6 pounds.

Brown explains that organic waste including food waste in landfills decomposes anaerobically, producing methane, a greenhouse gas with 32 times more global warming potential than carbon dioxide over a 100 year period (Intergovernmental Panel on Climate Change Report, 2013). "We have a responsibility to divert waste from landfills to recycling and composting," says Brown, who notes that Massachusetts landfills will reach capacity within the next few years. She adds, "There is no throwing 'away' and we need to reconstruct waste as resources in the transition to a sustainable world."

As part of her Div III project next year, Brown plans to create a Five College Zero Waste Alliance.  "Striving towards zero waste can help build a more inclusive and equitable world," Brown says, "combating the disproportionate impact of climate change and pollution on communities of color and people living in poverty."

According to RecycleMania data, Hampshire College has reduced its greenhouse gas to date by 129 metric tons of CO2 equivalent, comparable to 25 cars being taken off the road or the energy consumption of 11 households.

Loyola Marymount University and Rhode Island School of Design were crowned the winners of the 2017 RecycleMania competition. The 2017 tournament featured 320 schools participating from 46 states in the United States, the District of Columbia and Canada, with an enrollment of 4.1 million students.

Between the Feb. 5 kickoff of RecycleMania and the final recycling weigh-in on April 1, participating schools recycled or composted 69.9 million pounds of waste, preventing the release of 77,791 metric tons of carbon dioxide equivalent (MTCO2E) into the atmosphere, which is equivalent to preventing the annual emissions from 16,400 cars.

A complete list of Hampshire’s results in the tournament is available here.

The RecycleMania program is governed by a nonprofit organization of the same name, made up of a board of directors who are recycling and sustainability managers from participating universities. RecycleMania partnered with the US EPA’s WasteWise program, College and University Recycling Coalition (CURC), Keep America Beautiful, National Wildlife Federation. For complete details, visit RecycleMania.org.
Hampshire students in the group New Leaf cleaned up trash on campus and in the woods on Earth Day, April 22, 2017. Photo by Emily O´Connell. 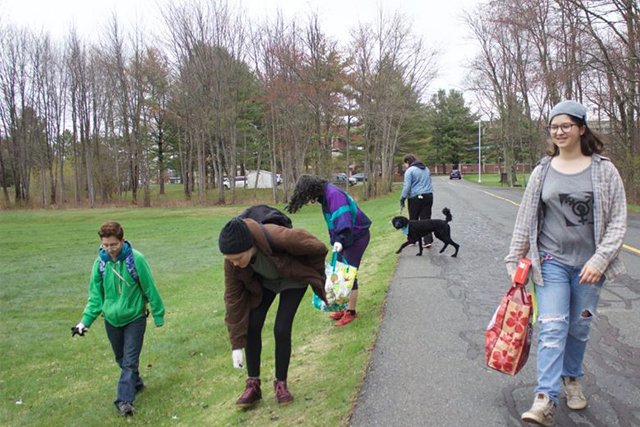