Student-Driven Theatre On Display in Hampshire’s Theatre Board

According to legend, the Hampshire College Theatre Department was founded when a group of between 30 and 50 students, indignant and outraged at the lack of performing arts on campus, occupied the main lecture hall for several days in protest. But whether it’s legend or fact — and I was told emphatically that it’s fact —is unimportant; its existence as part of Hampshire’s zeitgeist is enough to continue the tradition of a student-controlled theater program.

The hub of this system is Theatre Board, a committee of students who have jurisdiction over an independent budget that makes up the majority of the Theatre Department’s finances. This makes Theatre Board’s budget the largest allocated to a student group at Hampshire. In weekly meetings, members vote on funding requests and decide where the program’s resources will be distributed. In practice, this group will understand all the functions of a professional theater.

College theater typically follows the model of regional theater, in which productions are structured hierarchically and every member of the team has a role with clearly defined duties. In addition, faculty likely determine the season, and most direction and design is done entirely by or led by professors. Students seldom have the chance to head a production from a technical, design, or directorial standpoint.

It’s different at Hampshire. Here students develop the skills necessary to work in a professional theater — the program is hands-on and everyone wears many hats. That may be one reason why Hampshire is alma mater to a proportionately high number of professionals in theater, film, television, and performing arts.

“We’re such a small theater program,” says Nat Gilsdorf, who is Theatre Board’s space monitor, “and we’re such an autonomous theater program that we can’t just focus on one aspect of production. We have to have knowledge of how the entire production is run as well as how the entire season is run, and I think Theatre Board prepares students for the possibility of working in professional theater much better than another college would because of that.”

When Gilsdorf refers to “the entire season,” he’s talking about what’s officially called the Slotted Season. Students bring forth proposals for the productions they want to get “slotted” — that is, lined up for the next academic year. Which titles will bring the best funding from the College, first priority over space and other resources, and the direct involvement of Theatre Board? Students must defend their choice by examining its place in the world, in the greater theater community, and on campus.

The Slotting Committee, which votes in the spring for the shows that will be mounted during the following fall and spring semesters, comprises five graduating Hampshire theater makers appointed by Theatre Board and approved by the Theatre Department faculty. In this way, the program continues in a student-driven direction.

Theatre Board doesn’t have chair. Instead, a facilitator leads the weekly meetings and mediates communication. This year, the facilitator is Ezekiel Baskin, a second-year student interested in theatrical management. They consider Theatre Board to be a powerful learning tool. “Members learn how theater works beyond the stage and the performance,” They said, “and beyond the workshop where props and set pieces are built, to the boardroom where budgets are designed and decisions are made. In addition,the people participating in Theatre Board learn better how to work in a group that sustains and cares for itself and others, which is one of the most important tenets of modern theater.”

Theatre Board also connects the work in the classroom to the work involved in a production, Baskin says. “Students use their skills of critical dramaturgy and innovative design that they learn in class to advance the ultimate direction of the theater program in general.

Says Theatre Board delegate Aidn White: “I think Theatre Board gives everyone involved the chance to help enact change about things they find important and plan ways to bring our community together. An example of enacting change,” says White, “is that we won’t fund productions or processes that aren't actively working on accessibility.”

The Theatre Department challenges students to break away from their comfort zone — and excel in that new territory regardless. Not restricted to one aspect of a production or one kind of theater, and with faculty and staff support, students at Hampshire can make work that is relevant to them and to their community. 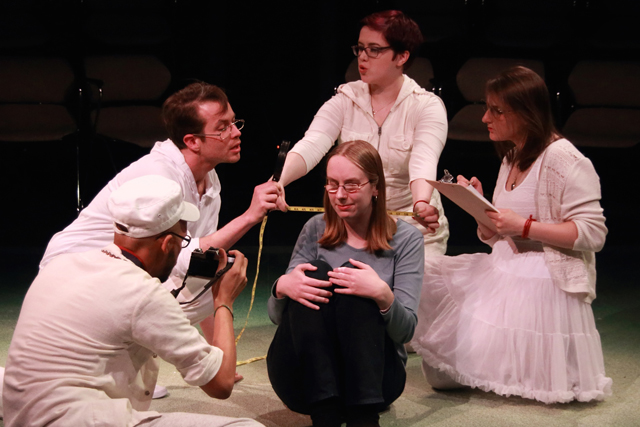 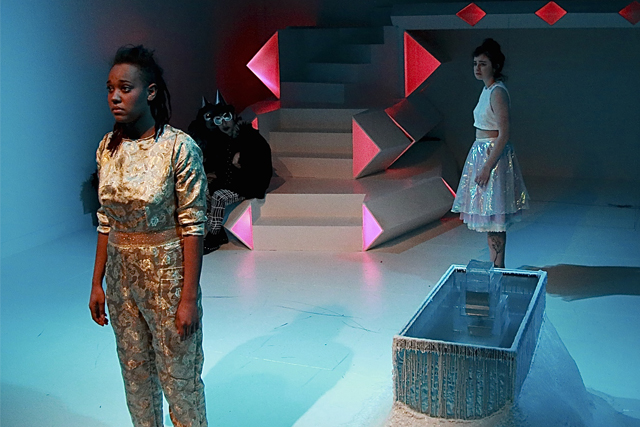