There are an estimated 750,000 to one million Roma in Spain. They first arrived in the early 15th century, and have frequently been the target of persecution. Since the death of the dictator Francisco Franco, in 1975, they have become more integrated into Spanish society but still face discrimination.

Los Gipsy Kings routinely draws criticism for reinforcing stereotypes about the Roma people, often portraying the group as closed-off, money-obsessed consumerists. This stands in stark contrast to the dire conditions many Roma families are facing in the midst of Spain’s economic crisis. They are twice as likely to be unemployed as other Spaniards and have a higher school-dropout rate, and their life expectancy is eight years below average.

Fuentes traveled to Spain to conduct interview Gipsy Kings viewers and other Spanish residents to study anti-Roma sentiment. She found that most of the 21 participants blamed Roma people or their culture for their perceived failure to integrate; only two of them noted that discrimination against Roma may be a cause as well as an effect of non-assimilation.

The issue of integration/non-integration is central to debates about Roma marginalization across Europe, and the belief among the non-Roma majority that Roma refuse to integrate, as Fuentes explains, “allows society to ignore the discrimination directed toward ethnic minorities and/or perceive it as normal.

“The show offers an image of Roma people as a self-exclusive community, and perpetuates the stereotype that Roma are responsible for their own seclusion,” she says. “Rather than finding effective ways to promote integration, most subjects had an ‘us-versus-them’ attitude.”

Fuentes used linguistic concepts such as discourse coherence and rhetorical relations to illustrate that the participants’ language revealed an implicit racism. She says these tactics have not been used to approach racist discourse before.

Participants chose syntax to soften what would ultimately end up being racist statements. These are referred to as “semantic moves”: phrases interjected into speech when an actor is about to state a position that is seemingly racist. For example, an individual might say “I’m not prejudiced, but . . .” before making a problematic statement.

She cites exchanges with interviewees during which they begin their statements praising Roma street vendors’ work ethic but ultimately end up criticizing them for being rule breakers. As Fuentes explains in her thesis. “Though the subjects seem convinced that they are not prejudiced toward the Roma, and provide their positive interactions they have had with Roma people as examples of their tolerance for the community, what they do not appear to realize is that, in discourse, such well-intended recollections can reinforce or hide implicit anti-Roma attitudes.”

Her committee was cochaired by Linguistics Professor Daniel Altshuler and Media Studies Professor Viveca Greene, and both are effusive in their praise. Altshuler calls her “a true pioneer”: “Her work opens up new research questions at the interfaces of media studies and linguistics, as well as within each discipline. She is a poster child of interdisciplinary research.”

Greene, who has worked with Fuentes for the entirety of her time at Hampshire, says that her project is “effectively graduate-level work. In her second year at Hampshire, Anita took my class Audience Research & Media Studies, conceived of and carried out an audience study of her own, and wrote it up as a formal communication, journal-style article.

“I always say that Hampshire students are extremely well prepared for graduate school; Anita was well prepared before she even started Div III,” Greene says.

Fuentes is staying at Hampshire as a teacher’s assistant in the Institute for Linguistics, Image, and Text class, part of the College’s Summer Academic Programs. Although pursuing an advanced degree is in her future, she says, her immediate plan is to revise her Div III and translate it into Spanish.

“It’s a work in progress; it’s not something I’m going to be done with when I graduate — it’s something that I’m truly interested in, and want to pursue,” she says. 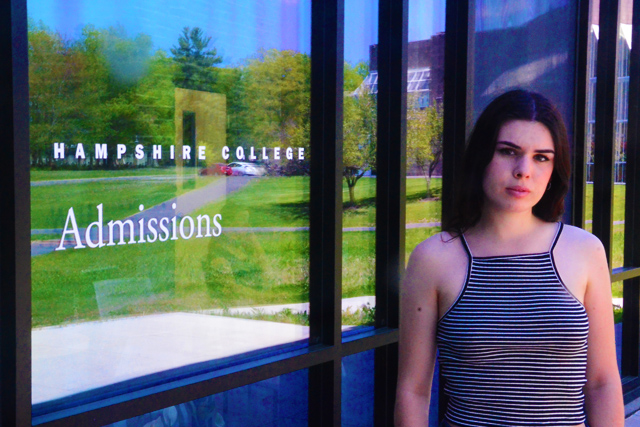