Flannery Weiss’s Division III thesis builds on a simple premise: Sexual education is health education. Weiss designed an inclusive sex-ed curriculum for K-12 schools based on a year of intensive research, with an eye on implementing it while pursuing a future in education administration.

The project began with research among Five College students on how their sexual-health education was influencing their interactions in college. “Only five percent thought their sexual-health education was effective in actually teaching them skills to deal with their sexual health — things such as consent and communication,” she says. “And forty-five percent thought their sex ed was influential on their expectations of what relationships would be like on a college campus. This is important.”

For her thesis, Weiss took an exhaustive look at her subject: how it’s taught and its larger ramifications. In the Hampshire library, she read journal and news articles on sex-ed policy and curriculum change, as well as government documents, among them the annual House Appropriations Bill. Her 88-page thesis provides data and recommendations from multiple angles.

There are very few federal regulations for sexual-health education in America, Weiss says; policy is loosely guided by 1981’s Adolescent Family Life Act (AFLA), a bill that promotes teenage abstinence in light of the HIV epidemic, and, she says, it still defines the federal government’s approach.

“Almost all of the standards or guidelines are left to the states. Every state has a different approach, and many of them don’t have policies,” she says. States that do have them fall into one of three camps: progressive policies with mandated sex ed covering consent, sexual assault, abortion, contraception, and abstinence (California, for example), more-conservative programs that teach that sex is meant for heterosexual marriages (Texas), and states with some standards but no explicit restrictions (Massachusetts).

“There’s a huge range in how sexual-health education is taught, and the policies that dictate how it’s taught across the nation, which leads to a lot of discrepancies in terms of what students are taught and how they’re taught it. Ultimately that means there’s no consensus on what this should look like,” she says. “You have students coming into college in their adult years with a range of knowledge, which is not a good thing. Further, a lot of curricula are designed using shame-based language, and noninclusive language that’s designed to shame students into thinking that their sexual impulses are bad, in order to prevent them from actually engaging with those things.”

•    Addresses concepts such as contraception, gender identity, and consent.
•    Is unbiased and medically accurate.
•    Starts as early as kindergarten, teaching young children how to communicate when the actions of others make them feel uncomfortable, and then, as enter children enter their teens, teaching about sexual consent.
•    Is accessible to people of all identities, without an emphasis on heteronormative relationships.
•    Is taught by engaged professionals, trained by the same standards.

Professors Tim Zimmerman, Steve Dillon, and Marlene Gerber Fried made up Weiss’s faculty committee. “Steve challenged me to think in a critical lens and Tim’s expertise in research methodology was really helpful,” she says. “Marlene has a huge wealth of knowledge, and was an inspiration to work with.”

Weiss is putting her degree to use this fall, as she begins a master’s program in higher education and public policy with an assistantship as an advisor at UMass Amherst. “Learning to do a project like my Div III was important as I'm starting grad school this year,” she says. “Hampshire teaches you how to do a self-made project as an independent academic, like you would in grad school.”

Weiss believes addressing sex ed early gives children a fundamental understanding of the topics before they inevitably learn about them as they grow older. “We need a foundational knowledge to prevent issues like sexual assault. Being able to talk about those things would help a lot with that kind of culture,” she says. “We really need national standards for what every student in the United States is learning.” 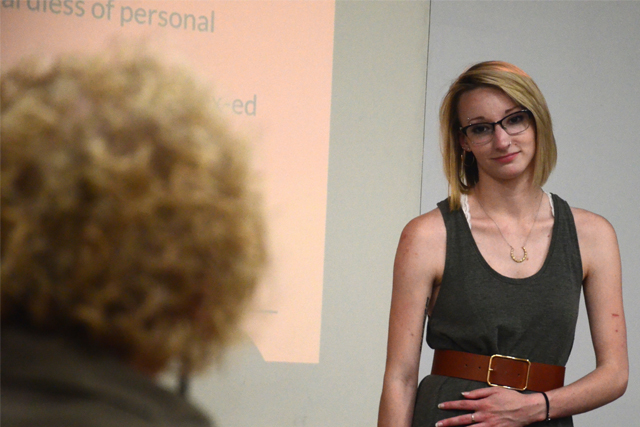