Prison is a form of slavery when viewed from the perspective of U.S. history, author says

In Fugitive Life: The Queer Politics of the Prison State (Duke University Press, 2018), Assistant Professor of Queer Studies Stephen Dillon examines texts and other works by, as he puts it, “countless feminist, queer, and antiracist activists” of the early 1970s. This largely forgotten group left their homes, families, and friends to fight against racism and imperialism in a time of national turbulence, living underground in safe houses and, if arrested, in prison.

Professor Dillon will read from his book and give a talk at Amherst Books on Friday, October 26, at 7 p.m.

When viewed from the perspective of U.S. history, Dillon says, prison is itself a form of slavery. “The Thirteenth Amendment bans slavery in the United States unless someone has been convicted of a crime,” he says. “Slavery is alive in the U.S. prison system.”

A recent example, he says, is “the theft and caging of immigrant children,” akin to the theft of the children under slavery. This recent immigration policy no longer covers up an ideology, he says. “It’s out there. Scholars were writing about a post-racial era, and then we turned hard in the opposite direction. Now we’re grappling with this.”

Dillon’s book contains writing from well-known figures in U.S. history, among them Angela Davis, to more obscure ones, such as Rita Bo Brown — a member of the 1970s revolutionary group the George Jackson Brigade — who robbed banks disguised as a man in order to fund the group’s activism.

“Many of the women who lived underground or were imprisoned were veterans of the civil rights movement,” says Dillon. “They’d seen firsthand the fight for voting rights, but felt that that solution didn’t ultimately produce lasting results and social justice. They became more revolutionary in their philosophy and tactics. This was the era of the Black Panthers.”

The figures in Fugitive Life saw themselves as part of a global revolutionary movement that, at that time in history, encompassed countries in Asia, Latin America, Africa, and Europe. In fact, Dillon explains, revolutionaries in those countries were perplexed that their counterparts in the United States, in their view, had gotten stalled in their struggle after the initial wave of activism in the 1960s.

“Even Martin Luther King realized that you can’t just ‘vote out’ racism and social oppression,” Dillon says. “The solution of ‘vote it out’ didn’t work. Slavery didn’t end because of a vote. It ended because of a global abolitionist movement and three hundred years of enslaved people fighting back. That’s what made it unsustainable.”

One way the feminist, queer, and antiracism activists of the 1970s did fight back, even when underground or in prison, was by promulgating their ideas through communiqués, literature, films, memoirs, prison writing, and poetry. Dillon turns his critical eye to this creative output in order to analyze the centrality of gender and sexuality to what he calls “this new mode of racialized state power within a neoliberal state.”

Dillon writes about prisons and, from the perspective of feminism and queer studies, he theorizes that the prisoners in Fugitive Life were “queer figures from which to highlight how neoliberalism depended on mass incarceration.”

Believing that they were out of options within the system, the political activists in Fugitive Life endorsed violence to end, as Rita Bo Brown wrote, prisons as “big business [and] places of terrorism . . . that support white supremacy.”

Thinking back to the idea of enfranchisement and voting as a means to lasting social justice, Dillon says, “it’s jarring to me that almost everyone in the media is saying that voting is the way to end this treatment of immigrant children. That treatment is an extension of slavery. Slavery wasn’t just voted out. It took a worldwide abolitionist movement and three hundred years of resistance of the part of slaves to outlaw it in this country.”

Dillon came to Hampshire, in 2015, after earning a PhD in American studies from the University of Minnesota. His scholarly interests are queer studies, race and white supremacy, critical prison studies, transgender studies, critical theory, and feminist studies. He has published articles in the journals Radical History Review and Women and Performance: A Journal of Feminist Theory. He also contributed an article to the anthology Captive Genders: Trans Embodiment and the Prison-Industrial Complex (AK Press 2015). 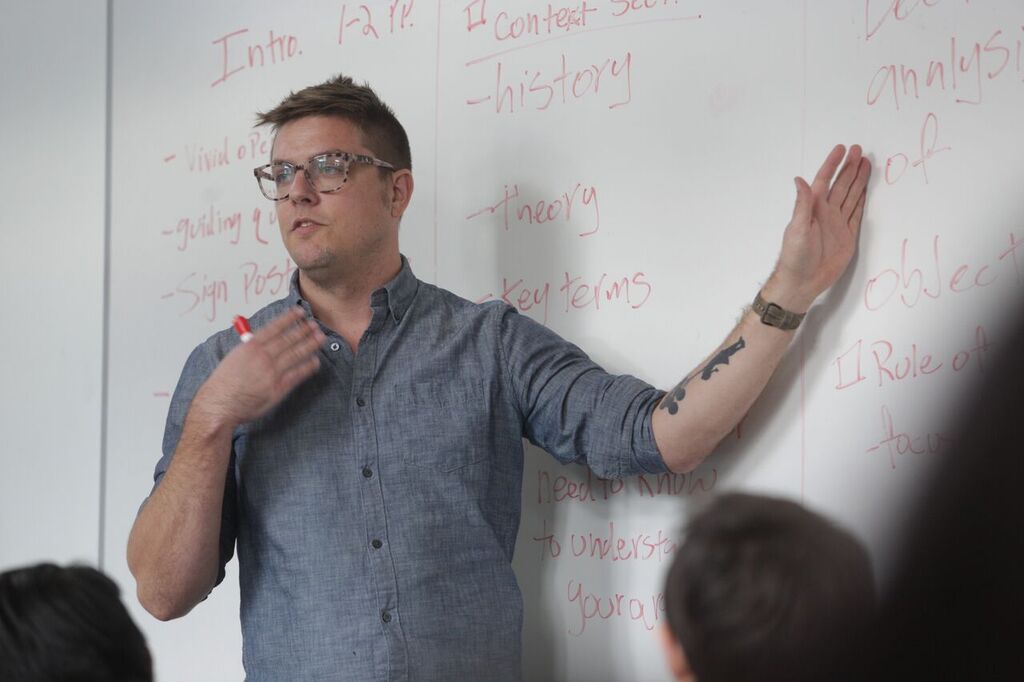 Hampshire Mathematics Professor Sarah Hews Published in PLOS ONE on Behavioral Thermoregulation
The article was in collaboration with Renae Brodie, a professor of biological sciences at Mount Holyoke College, and part of Hews’ larger work on energy budget modeling.
Read Article
Professor Alan Goodman featured in Discover Magazine and Two Podcasts Focused on Race and Structural Racism
Goodman published on the topic of race and biology in Discover in June 2020. His article “Race Is Real, But It’s Not Genetic” examines science’s often dangerous conflation of outcomes and genetics.
Read Article
Hampshire College Works to Develop Anti-Racist Plan of Action
Bold steps are being taken to change the culture at the College for the long term.
Read Article
Stay In Touch
With The Communications Office
Snail Mail
Office of Communications
Hampshire College
893 West Street
Amherst, MA 01002
Phone + Email
413.559.6062
communications@hampshire.edu