A small window into the legacy of filmmaking at Hampshire

No one would ever use the word dynastic to describe Hampshire College.

But it’s undeniable that the film program has linked one cohort of successful documentarians to the next, providing successive generations of directors, editors, and producers with encouragement, experience, and opportunity. Three alums — Joe Fenstermaker 05F; his sister, Linda Fenstermaker 09F; and Eileen Meyer 00F — exemplify the connectedness of Hampshire film alums and how this extraordinary network has supported students and graduates over the years.

“I got my first job from the production company Simon and Goodman,” says Meyer, referring to the joint film enterprise of the late Kirk Simon 75F (an Oscar-winning documentarian) and his wife, Karen Goodman 72F.

Now an editor and producer in Los Angeles, she recalls, “I spent a few years working my way up in Simon and Goodman. It was a small company. I was an assistant editor, then an associate producer. I held the boom, did sound, did everything. But editing was my favorite.”

Meyer went on to edit the 2017 Emmy Award–winning documentary Best of Enemies, about the relationship between intellectual antagonists Gore Vidal and William Buckley. The film, which premiered at the Sundance Film Festival, also made the 2016 shortlist for the Academy Awards. She’s now working on a Netflix feature, Crip Camp, the story of an experimental summer camp in the 1970s for children with disabilities. The camp sparked the disabilities-rights movement.

“I got burned out on New York, so I moved to Memphis to work on an independent film project with friends,” Meyer says.

She believes that smaller cities can help a film career grow. “It was such a small city that I could show up with New York experience and get a lot of editing jobs. It was less competitive working outside a big market. . . . You can make your own way and find cities with good independent film scenes,” she says. “I moved up a level and got experience that I wouldn’t necessarily have gotten in New York.”

“He was a good friend of mine, and he was getting an MFA from CalArts. When I was visiting him, I watched his thesis film and began giving notes, so we decided to work on it together. That’s how I fell in love with L.A. and decided to stay.”

(Ernst’s thesis film led to a career as a director and producer. He worked on the Amazon series Transparent from the pilot through season four, for which he directed the season finale. He also created the series’ main title sequence. His first feature, Adam, premiered at the Sundance Film Festival last winter and is currently in theaters.)

The difference between Hampshire and any other place is the possibility it offers and the expansion of horizons.
Joe Fenstermaker 05F

Meyer took to L.A. and made it her home. She worked on independent documentaries, among them Alabama Bound, about lesbian parents fighting for custody of their children.

“It was an amazing project,” she says. “I was working on it when Joe [Fenstermaker] called to say that he was moving out to L.A. He asked if we could meet for coffee. He had some really good credits from working in New York, and it was great timing because I needed editing help on the project.”

Meyer hired him and quickly promoted him to coeditor.

“We edited the film together out of Eileen’s home and my home,” Fenstermaker says. “Eileen is a real powerhouse in the Hampshire tradition of being incredibly self-motivated and independent.”

Although Meyer and Fenstermaker never crossed path at Hampshire, he says, “we were able to collaborate successfully with a high level of trust. We had a baseline of shared principles.”

At Hampshire, he studied under Professors Abraham Ravett and Bill Brand.

“The difference between Hampshire and any other place is the possibility it offers and the expansion of horizons,” Fenstermaker says. “Being in western Mass., you’re in the New York City orbit. That made the transition between being a student and working in film possible.”

In New York, Fenstermaker got a job with Hampshire alum Brett Morgan, a documentary-film director, whose most recent film, Jane, about Jane Goodall, had its world premiere at the 2017 Toronto Film Festival and earned an Emmy Award the same year.

Fenstermaker also worked for Oscar-winning filmmaker Alex Gibney at Jigsaw Productions, where he was an assistant editor.

His younger sister, Linda Fenstermaker, was also a student of Hampshire Professor Bill Brand. In his introductory film class, she learned how to use 16 mm film and still works in that medium as an experimental filmmaker.

“I fell in love with working on celluloid,” she says. “It’s not easy to work with, and Bill taught me the techniques I still use.”

In addition to filmmaking, Linda Fenstermaker has curated various film festivals and screenings and served as a visiting artist at Evergreen State College, Seattle University, and the University of Washington. She currently lives in the agricultural area of Skagit County in Washington state, and when she’s not creating films, she works for an organic seed company that sells to small farmers.

“I originally came to Hampshire for the farming program,” she says. “Both farming and 16 mm film are very tactile. I love using my hands.”

Her current project is about immigrant labor on farms and looking at “the presence and absence of that labor and what immigration in this country looks like on a farming scale.”

Although she’d heard about Hampshire from her brother, she says she was also influenced by reading about the College in a book by Loren Pope. 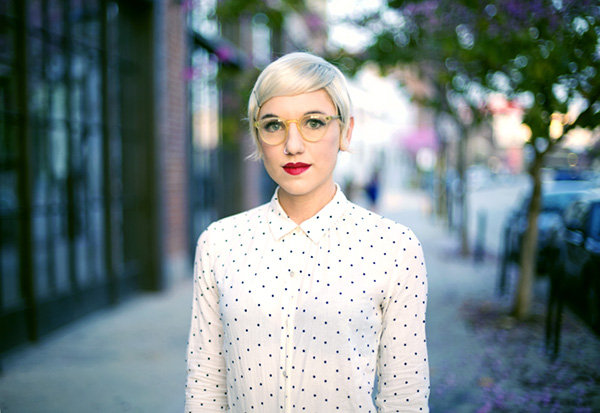