Hampshire College Welcomes Five New Members to the Board of Trustees

Vibhu Norby 06S is a multidisciplinary entrepreneur and currently the founder and CEO of b8ta,  a venture-backed tech company that is known for its award-winning electronics stores around the world. He's also an investing partner at Interlace Ventures, an early-stage venture capital firm. Previously, Norby worked as a software engineer at companies like Google, Nest, MySpace, and Roblox.

Mike Plenty 01F serves as the contract administration manager for the office of the chief financial officer in the Department of Homeland Security. In his role, Plenty helps business lines acquire new services, technologies, and systems to achieve business benchmarks. Plenty also oversees the organization's procurement strategy and spend, and promotes vendor diversity. Through his engagement, he acquires unique perspectives into new market opportunities, including digital identity, robotic process automation, and even a little bit of artificial intelligence. Prior to this position, Plenty managed a diverse portfolio in data governance, analytics, customer service, compliance, budget, and enterprise risk.

Plenty is a graduate of Hampshire College where his concentration was political science and he focused on voter behavior. He subsequently obtained a joint Executive M.B.A. from Brown University in Providence, Rhode Island, and IE Business School in Madrid, Spain.

Ananda Valenzuela 07F is the interim executive director of RVC, co-founder of the BIPOC Executive Director Coalition of Washington, and co-chair of the board of Change Elemental. Their work centers on organizational development, with a particular focus on equitable self-management and liberatory practices. Before RVC, Valenzuela worked at TSNE, a nonprofit capacity building firm, where they managed a consulting program and developed a fellowship program.

Alice Petty 89F currently works as an undergraduate advising director in the office of the vice provost for undergraduate education at Stanford University. In her position, Petty creates and develops academic programs that help students connect with faculty, engage in original research, incorporate service into their undergraduate journey, reflect upon and self-assess their own learning, and make academic decisions that align with their values and priorities.

After graduating from Hampshire College with a concentration in visual anthropology, Petty went on to earn a Ph.D. in near eastern studies from the Johns Hopkins University. Her first career was in archaeology, and she spent ten seasons as a field supervisor at the Umm el-Marra archaeological expedition in Aleppo governorate, Syria.

Omar S. Dahi is an associate professor of economics at Hampshire College and a research associate at the Political Economy Research Institute at the University of Massachusetts Amherst. He is the founding director of Security in Context, a research network on peace, conflict, and international affairs. He has published in academic outlets such as the Journal of Development Economics, the Journal of Applied Economics, Southern Economic Journal, Political Geography, Middle East Report, Forced Migration Review, and Critical Studies on Security. His last book was South-South Trade and Finance in the 21st Century: Rise of the South or a Second Great Divergence (co-authored with Firat Demir).

Dahi serves as an associate editor of the Review of Social Economy as well as the e-zine Jadaliyya and has served on the editorial committee of the Middle East Report. He is a founding member of the Beirut School of Critical Security Studies within the Arab Council for the Social Sciences (ACSS). Dahi has served as a lead expert on the United Nations Economic and Social Commission of West Asia's National Agenda for the Future of Syria program. Dahi was born and raised in Syria and currently lives with his wife and two children in Amherst.

Currently, there are 24 members total serving on the Board of Trustees. Their responsibilities are detailed in the college bylaws and include ensuring the institution’s fiscal integrity, strategic plans, and the quality of its academic programs. The Board maintains six constituency-elected positions: faculty trustee, staff trustee, two alumni trustees, student trustee, and student trustee-elect (non-voting). 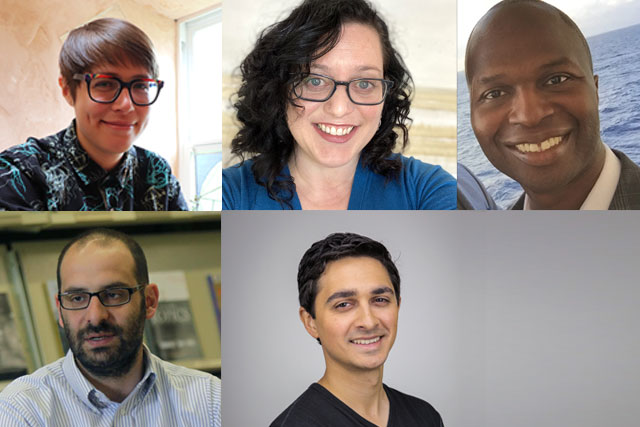 Hampshire College Alums Jenner Furst 02F and Julia Willoughby Nason 01F Codirect New Docuseries, “LuluRich,” on Clothing Company and “Cult” LuLaRoe
The docuseries includes interviews with the founders as well as past employees, many of whom lost their savings during their time working for the company.
Read Article
Hampshire Alum Asher Edes 03F Awarded Grant for Jewish Community-Building Project
In July, Edes received a grant to launch a community-based program at the intersection of spirituality, art, and embodiment, using an experiential and discussion-based learning model similar to their Hampshire education.
Read Article
Tech Startup Founded by Two Hampshire College Alums Raises $4.7 Million in Seed Funding
Nirman Dave 15F and Tapojit (Tapu) Debnath 15F started Obviously AI in 2018. Dave also serves as the chief executive officer and Debnath as the chief technology officer for the company.
Read Article
Request Information
You have questions. We have answers.
We’ve seen what can happen when you’re the entrepreneur of your own education. Request a viewbook and see for yourself.
Request Information
Stay In Touch
With The Communications Office
Snail Mail
Office of Communications
Hampshire College
893 West Street
Amherst, MA 01002
Phone + Email
413.559.6062
communications@hampshire.edu